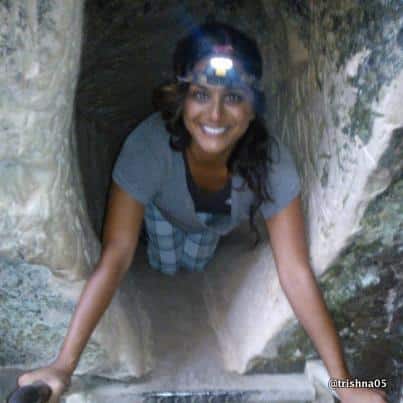 The Madras Tunnels are located near the Sea of Galilee, in the northeastern region of Israel. Surprisingly, it’s an historic site many Israelis have yet to visit and most foreign tourists have never heard of.

Jewish rebels dug the tiny tunnels as a means to seek refuge from Roman persecution, a stand-off also known as the Bar Kokhba Revolt. At first, their strategy seemed to work; the tight burrows were too small for a fully-armed Roman army to venture into and too dangerous for soldiers to crawl in one at a time. The Jews hid and lived there for days at a time before they were eventually smoked out and killed.

When archeologists first discovered the area, they thought what they stumbled upon was a water reservoir but later found narrow passages shooting from its base. There’s no text that seems to give the exact description of time, but further digging exposed some parts may have dated back as far as the first century B.C.

Lead by Michael, our tour guide,  we crawled in a single-file line one our hands in knees through ant farm-like passages. Along the way, we stopped at various points, learning of how the rebels engaged in guerilla tactics in a desperate effort outsmart their enemies. We  saw firsthand, the carvings in the rocks, niches which held oil lamps and expansive columbariums, with hundreds of holes in the wall once used to raise pigeons, all of which are still distinguishable.

For me, the tunnels are yet another powerful testament to the history of human plight and the will to survive, no matter how dire the circumstances. Imagining the fear and fortitude of the Jewish rebels was both a bone-chilling and humbling experience.

I’d recommend the tunnels for everyone to experience but it’s important to note a few things:

1) The passages are extremely tight and are almost impassible in certain places. Several of the turns are so tough, you’ll probably need to backtrack, find a spot big enough to turn around, and then continue head first. (If you are at all claustrophobic, this may not be for you.)

2) You MUST have a tour guide with you. Only a handful of routes have been well-marked and maintained, so it’s easy to get lost if you’re not with someone who’s been before. There’s also very little to no natural light. So in a line of six people, I’d recommend the first and fourth person wear head torches to safely navigate through the tunnels.

3) As I mentioned before, the tunnels are not well-known, especially with tourists. Michael believes it may be because the story is not mentioned in the Bible. Another reason may be that it’s rather difficult to physically and logistically do. Keep in mind the surrounding area does not have facilities like hotels or restaurants.

4) Lastly, I suggest when initially planning your itinerary to Israel, inform your tour company or guide that you would like to include a day trip and guided tour of the Madras Tunnels. As long as you plan for it beforehand, they should be able to accommodate you with no problems.