Off the beaten track, India: Tiruvannamalai

When I put out on my Facebook page that I was on a train bound for Tiruvannamalai, one of the funniest comments I got was “better save some vowels for the trip back.”  Tiruvannamalai (pronounced Tiru-vanah-ma-lie or Tiru, for short) is a mountain town located in south east India, three hours inland from the popular coastal cities of Chennai and Pondicherry.  It’s also a veritable hot spot for spiritual seekers.

Sadhus, satang’s, darshans and mantras waft through daily life like the spidery vein-like plume of smoke from the incense that’s always burning.  Spirituality & enlightenment is to Tiruvannamalai what hookers and strippers are to Vegas.  Team that up with a dense population, a lot of dust, high temperatures and spotty electricity and, much like a long weekend in Vegas, my four days in this guru run outpost left me feeling emotionally hung-over.

I arrived, by train, at 5am to a still and silent night.  A few families disembarked along with me but it mostly felt like I had arrived on another planet, alone.  I hadn’t secured any accommodation but had been given a suggestion for an ashram that was 300rupees ($6) a night called Siva Sannidhi.  I know arriving at 5am in a town in the middle of India with no accommodation sounds absurd but, a lot of the time, this is the way it’s done.  Just try and book a hotel in a rural town ahead of time – I dare you!

There is generally no problem catching a rickshaw at night time if a train is arriving.  I negotiated my fair with the first driver who approached (pounced) and within seconds I was speeding along the windy, bumpy, dusty roads in a three wheeler to my unreserved hotel room.

Upon arrival to Siva Sannidhi, noticeable only by the yellowing street light aglow out the front, I was greeted by a few stray dogs and a sleeping inn keeper whom my rickshaw driver roused by nudging him with his foot.

I took a deep breath, this was an adventure after all.

If you are on a budget, Siva Sannidhi is a great place for to stay.  All meals are free of charge and served in the cavernous, cafeteria style eating area.  Provided you don’t speak while you eat, take your shoes off before entering, wash your hands in the communal basin and bless the alter upon entering.  The meals are a very basic offering of (sloppy) rice & vegetables which you eat with your hands.  I recommend asking for a room with a mountain view, it is the most peaceful part of the ashram.

If you are a person more inclined to do your research, and you have some money to spend, Ramana towers is a fine place.  If you are on a little budget, but can afford a little more than $6 a night; Jothi Ramana can help with all your accommodation and transport needs.  All three places are close to Ramana Ashram and about 10minutes into the main area.

Tiru offers little opportunity for mass consumption or hedonism, unless it’s of the spiritual kind, since most activities revolve around worship, or spiritual education.  Forget about finding a quiet bar to sit in, you’re better off heading to the German Bakery for a chocolate ball to feel indulgent.  No alcohol or fine dining in this town.

Tiruvannamalai gained its popularity from the well-known Guru; Ramana Maharshi who, at 16, found enlightenment and went to live and meditate on Mount Aranchala.  He didn’t come back down again until he was 40.  Everyone is here for Ramana.  He is revered as much as any mythical God and it is where those seeking something greater than themselves go, hoping for enlightenment.

If you’re not interested in reaching enlightenment there isn’t really much to do.  The food isn’t world class and you won’t find much entertainment.  This is a place for meditation, contemplation and conversation all centered on ascending the ego driven desires of a modern world.

But, it’s a great Indian experience.  You can easily rent a bike (for 30cents a day) and ride around the mountain.  Or, take the afternoon and meditate in the Ashram.  You can visit the Temple Annamalayiyar which closes in the middle of the day so be mindful of opening and closing times.  A morning stroll up the mountain to the little Ashram offers breathtaking views of the town.  It’s quite beautiful from high above.

You can also use the driving services of Jothi Ramana who will provide you with an insider’s tour of this wild and fascinating spiritual town.

And, it is a fascinating and mystical town, with spotty electricity. 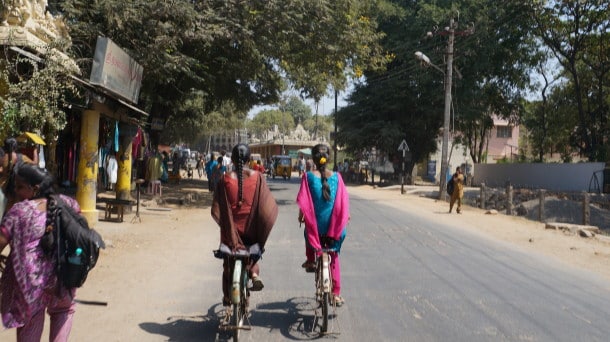