Our First Family Plane Trip EVER 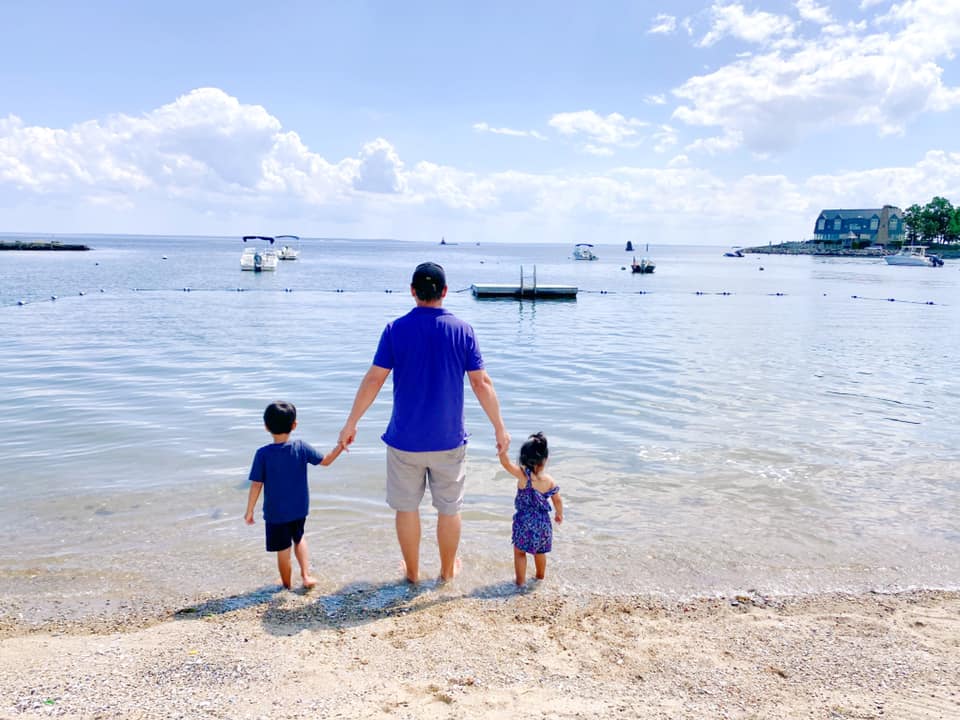 Greetings from Connecticut! Not only did we surprise my dad but we surprised ourselves, as this was a last-minute trip even though I had booked the tickets back in September. Huh? Let me explain.

If you’ve been getting my Daily Travel Tip email since September 2020, then no doubt you saw my money-saving tip about using your American Airlines (AA) AAdvantage miles for spring and summer trips.

I know what you’re thinking: Back then, the USA was in a really dark place and we had no idea if we would ever see the light at the end of the tunnel. But I’m a positive person so I had hoped (and prayed) we would. That’s why I booked tickets for my family each month, starting in April, for Los Angeles to New York (JFK). Besides, there were no penalties to cancel, in case we didn’t find effective vaccines or didn’t feel safe traveling.

I booked our tickets to New York because I grew up in nearby southern Connecticut and still have a ton of family there, who all wanted to meet the newest addition to our family, Olivia.

JFK is just 42 miles from my hometown and the closest airport with frequent nonstop flights. Business Class tickets for the ultra-premium seats on AA’s A321T aircraft were going for just 20,000 miles a pop! That’s how much Economy Class tickets cost on a good day, pre-pandemic. So I gobbled up a bunch since I knew those low prices weren’t going to last long.

Even though the US is in a much better place than it was in April or May, my wife is even more cautious than I am when it comes to our kids, especially since they’re not vaccinated. I was open to them flying but she wasn’t. She kept saying it wasn’t going to happen this year, that she wouldn’t fly with the kids and to cancel the tickets. But I didn’t cancel them, just in case there was a family emergency or COVID-19 numbers dropped so low she would be comfortable.

In the meantime, prices sky rocketed to 82,000 miles per seat, which is more than what it would have cost for four. Good to know: You can get them cheaper with this trick.

Although my kids had just seen their 92-year old grandpa when he visited us in California, I still wanted them to spend as much time with him as they could and to see their cousins that they hardly know, thanks to the pandemic. There was a family event that we wanted to participate in so just a few days before, I reminded my wife we had tickets to New York for the upcoming weekend and shockingly, she said, “let’s do it.”

If you’re thinking, “I thought your dad lives in Florida,” you’re right, he does. But I surprised him in Florida in mid-May with business class tickets to see all of his grandkids (in California and Connecticut). Here’s my story and video of how that went down.

Then, just a few weeks ago, I boarded his LAX-JFK flight to escort him to see my brother’s kids but while we were at LAX, he talked me out of going with him. Here’s that story. 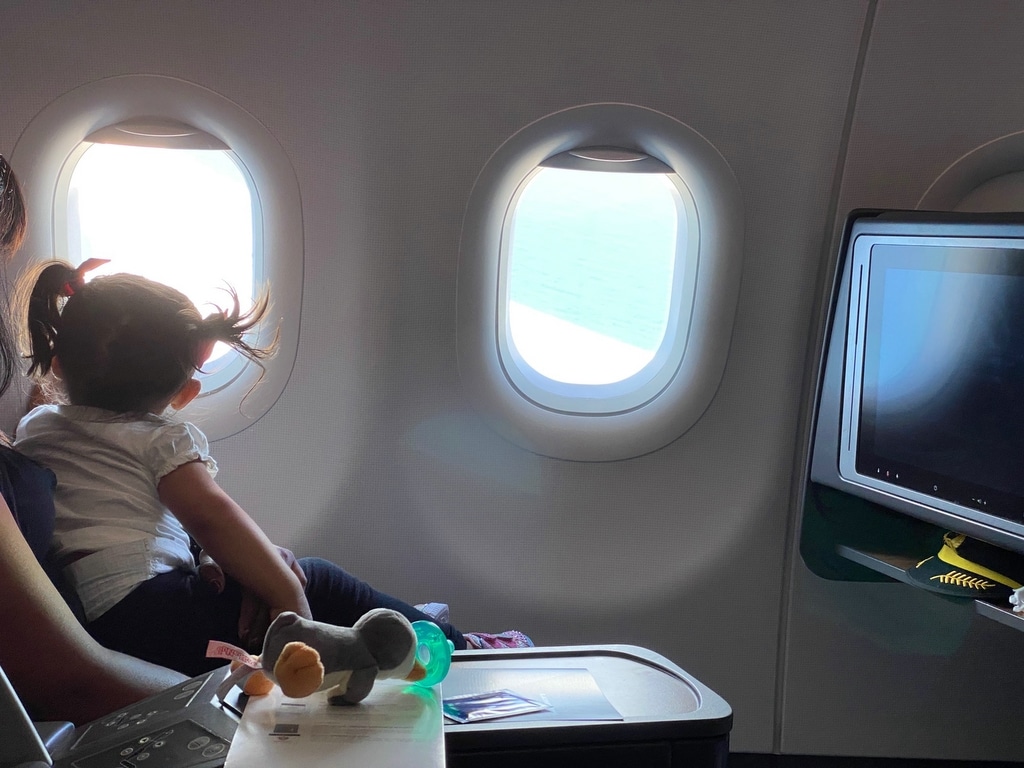 The whole thing was quite surreal: Just having plans for a long-distance family trip, something that used to be old hat to us, has quickly become foreign. Even packing for the trip was weird, starting with pulling out our dusty suitcases and backpacks. All of these habits used to be a twice monthly or even weekly occurrence and now, it was our first time packing for the whole family in years. That’s right. Not only was this going to be the first flight ever for my 22-month-old daughter, but it was the first time in over two years that my wife and son (4.5 years old) stepped back on a plane! (My wife was grounded during the last half of her pregnancy, then we had a newborn, then COVID.)

When you have little kids, the most difficult part of traveling is transportation, unless you have the right car seats and strollers. Foolishly, we got rid of our Doona stroller/car seat (hands down, the biggest travel essential when traveling with little ones) when Jack grew out of it because we weren’t expecting more kids. When Olivia was about to start traveling, around 8 months old when she’d have all of her important shots and her immune system would be stronger (just like we did for her brother, who’s been on over 60 flights), the pandemic hit.

Olivia’s first trip was supposed to be to Maui for Easter of 2020, followed by Florida, Toronto, New York and Europe. But we all know what happened.

Renting a Doona
While my wife was going through her packing checklist, she said, “We need a Doona!” I said, “Whoa! Whoa! Whoa! We can’t just buy one; they’re expensive we don’t know how much we will use it since we don’t know how she will do on the flight and the weight limit is 35 pounds. We ended up renting a Doona from BabyQuip.com. We’ve worked with them before so they hooked us up but they are great for travel. They rent all kinds of baby gear and deliver it to your destination so you don’t have to cart it all with you on the plane. It’s an amazing service. 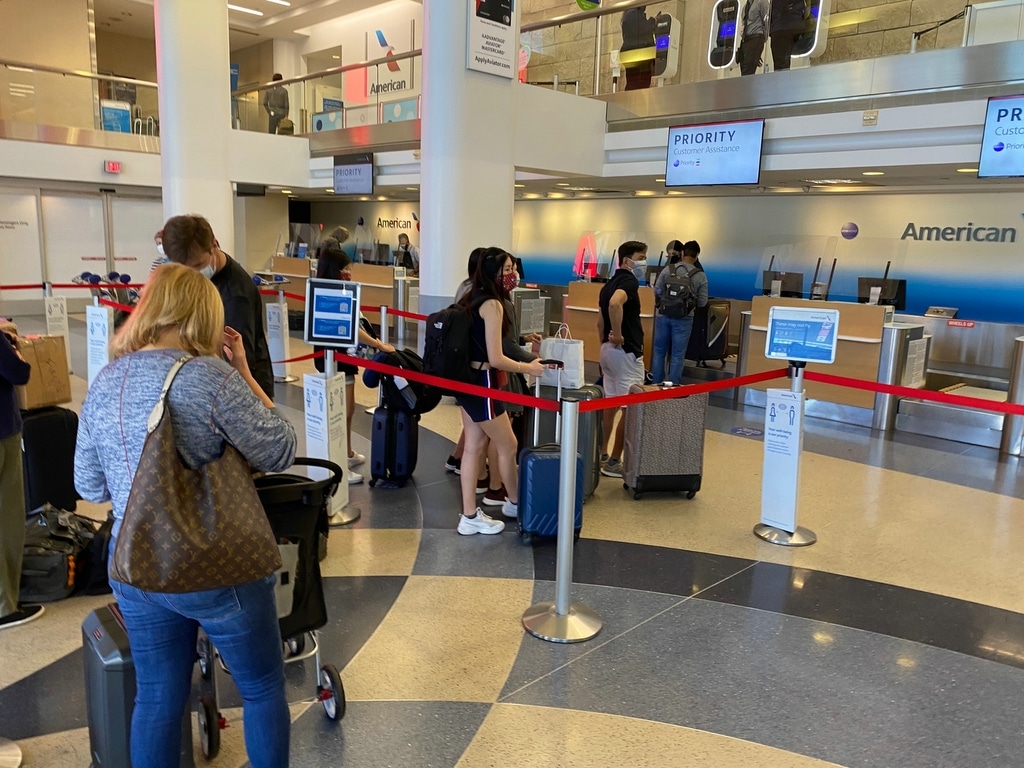 LAX
We arrived at LAX 90 minutes before our 1:30pm flight on Saturday. The line to check in was fairly long and slow …. and that was the Priority Line! Instead of having my kids wait inside, my wife kept them outside with her and just came in when I got to the front of the line. That made it safer and a more pleasurable experience for all. 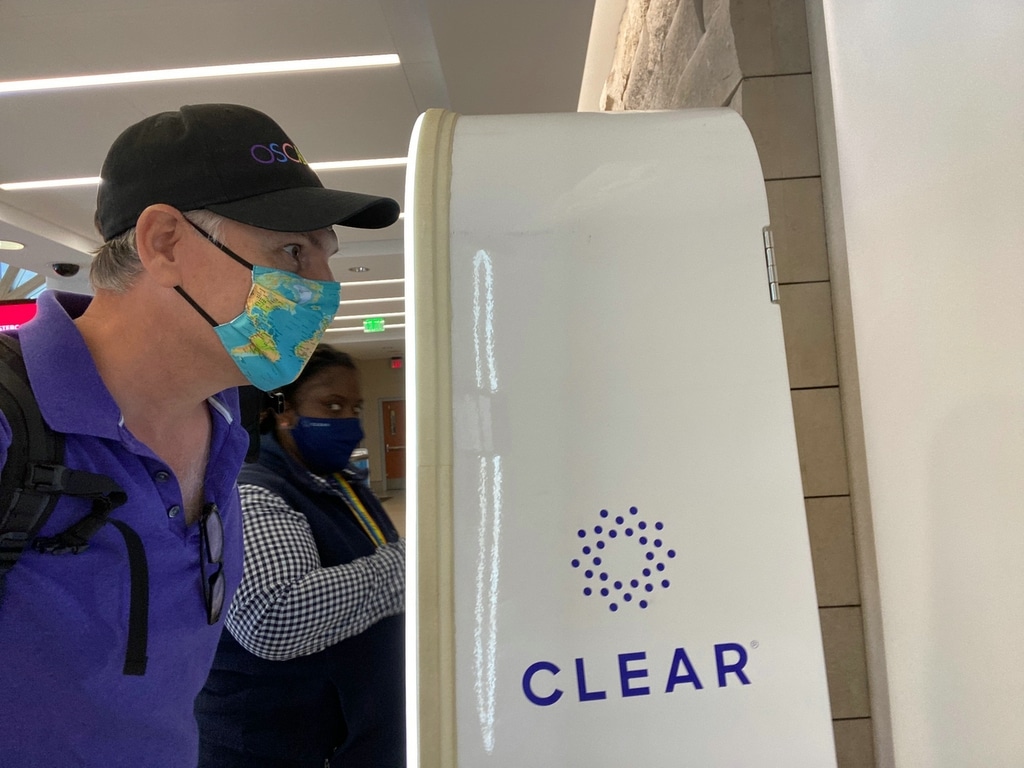 Security
There was no line for TSA Pre Check but since I wanted to get photos of CLEAR, we used that instead. I also wanted to try it because it’s been over 15 months since I’ve used it and I just renewed our membership (here’s how to get CLEAR for cheap) just in case the security line was long. 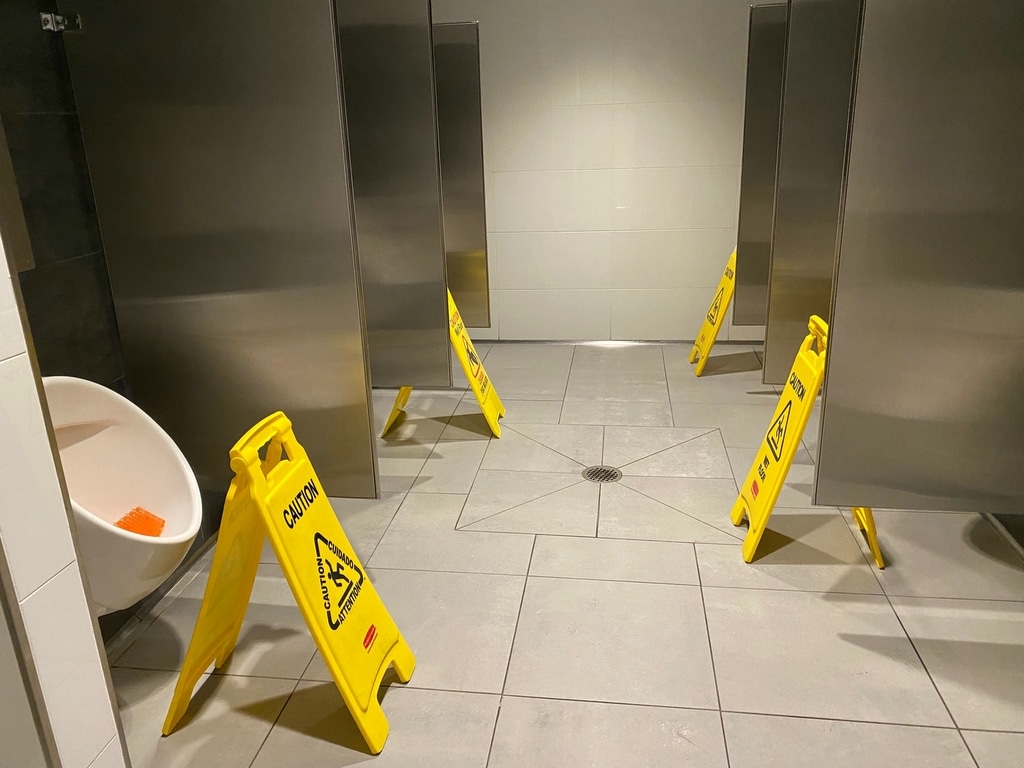 Admirals Club
We still had almost an hour before boarding and because we had Business Class tickets and were flying in premium in one of American’s Flagship planes, we could access the Admirals Club. We went up there to get some snacks and drinks, which worked out well since it wasn’t crowded. Snacks are still served in individual plastic containers and drinks need to be ordered from the bar (including soda, juices and water). The men’s bathroom had every other urinal blocked off because COVID rules were still in effect but I think they’re gone now as California fully opened on Tuesday. 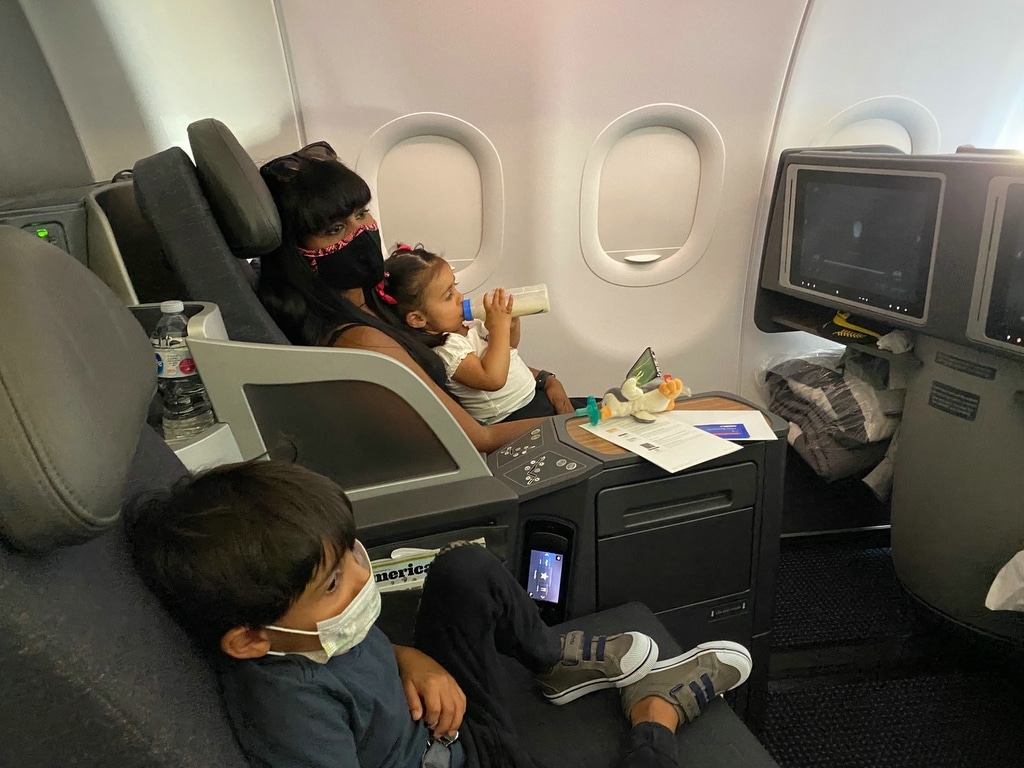 Boarding
When we got to the gate they were boarding Group 7 out of 9, which was perfect because we wanted to be the last on the plane. We do this so not everyone was walking by our kids and to keep their time on the plane at a minimum. I recently wrote a post about my number one and two travel tips, which includes bringing chocolates for the flight crew. Here are those tips, plus a cute photo of my children visiting the cockpit. 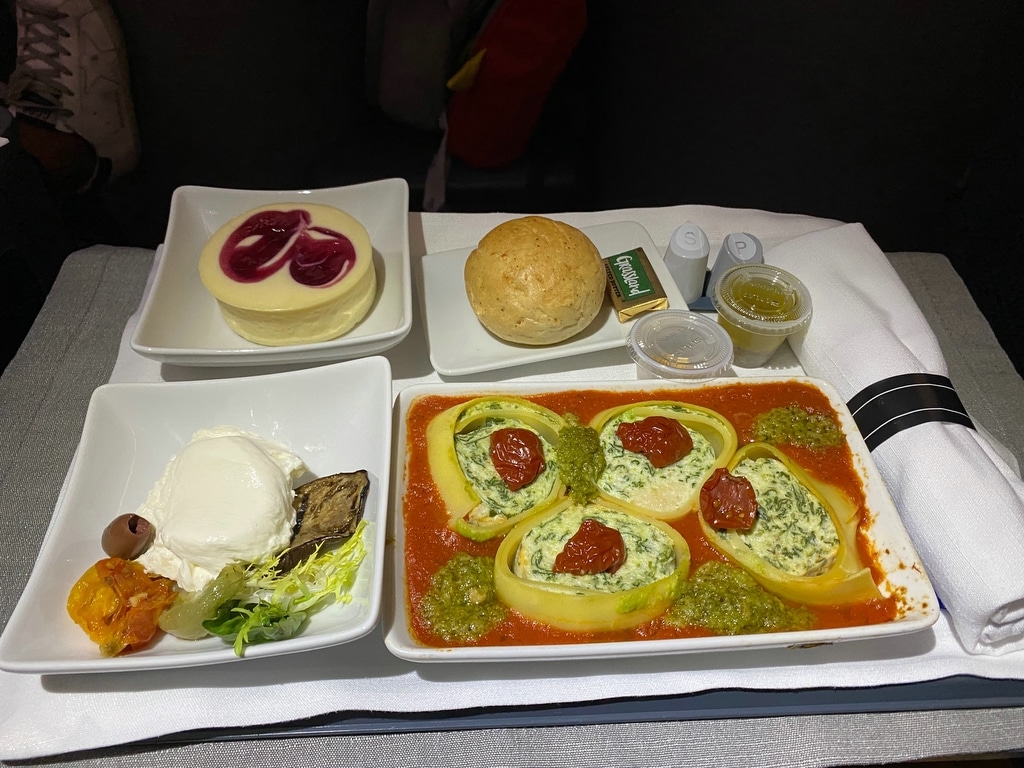 Flight
The flight was smooth and quick and we got in a 45 minutes early. There were no long tarmac delays on either end and the child’s meal we ordered was impressive. It was spaghetti and meatballs. Actually, all of our food was impressive and my wife’s pasta (spinach and ricotta pasta pictured above) was the best meal I’ve ever had on AA.

JFK
The only hiccup was that the jetway door at JFK wouldn’t open so I had to wait 20 minutes for the gate-checked stroller (my wife and kids waited by an empty gate). It took us almost 20 minutes to walk from the plane to baggage claim because it’s a crazy long walk and my kids are slow and wanted to explore instead of hustle. By the time we got there, the baggage carousel was completely empty and our bag was nowhere in sight. For a second, I thought it had been stolen but I checked the nearby baggage claim office and there it was with a bunch of others.

Don’t Fall For This Airport Scam
It turned out to be a good thing we took so long to get to baggage claim because my Blacklane driver, who was excellent, didn’t monitor the flight for some reason so he showed up just a few minutes before when I booked the car. Otherwise, it would have been a long wait. This is when I noticed that New York’s “gypsy” taxi/car service drivers have upped their game (here’s my warning for avoiding this airport scam).

We’re about to head back to the airport for our next adventure, which I will share with you next week.