What I love most about flying to the west coast from my New Jersey home is the feeling that I’m getting a jump on the day despite the six-hour flight. On my first visit to Washington state—a relatively short one with just four days on the ground—I wanted to cram in as much as I could. So when my 9am flight out of Newark on Alaska Airlines got me into SeaTac airport around noon, I was energized. I jumped in my rental car, headed south out of Seattle, and within an hour I’d reached Olympia and the Billy Frank Jr. Nisqually National Wildlife Refuge, the first stop on my photographic journey.

Here, in photos, is part one of my journey:

The Nisqually National Wildlife Refuge, founded in 1974, is a 3,000-acre, protected, bio-rich estuary consisting of grasslands, marshes, and forest habitats. It’s located in the Nisqually Delta, where the Nisqually River’s freshwater merges with the saltwater of Puget Sound.

In addition to being a beautiful place to walk around, the Nisqually National Wildlife Refuge is a sanctuary for over 275 migrating, breeding and wintering bird species and pristine migratory habitat for steelhead trout and several salmon species. 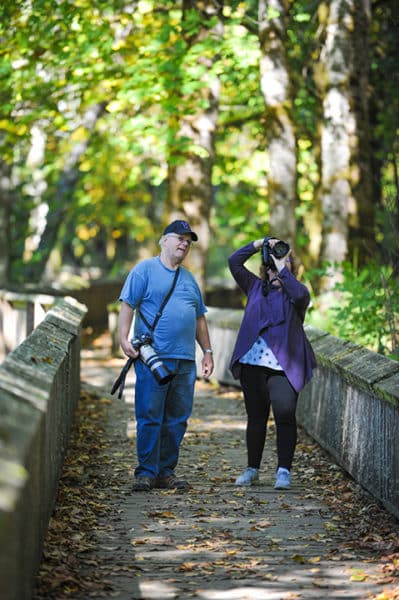 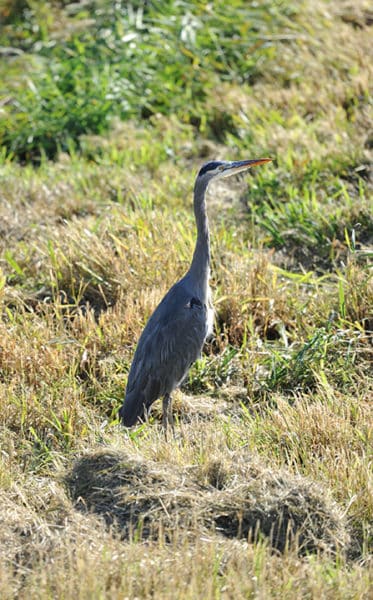 The Inn at Mallard Cove


I took my first night’s accommodations in Olympia at the lovely Inn at Mallard Cove, an English Tudor-style waterfront bed-and-breakfast owned and operated by Linda and Don Malatesta. Linda and her cat Sophie warmly greeted me and then gave me and a visiting couple a quick tour of the downstairs common rooms and a basic inn overview.

The Inn at Mallard Cove is a small operation with only three second-floor guest rooms, each with a private bath and fireplace. My room was lovingly appointed with English country antiques and modern amenities including a retro cathedral radio/CD player and a pair of binoculars for viewing Puget Sound from my balcony. Breakfast, too, was truly a treat. On each of my two morning stays I enjoyed poached pear in red wine sauce, organic yogurt with local raspberries, basil pesto-baked egg, chèvre cheese, assorted muffins, and brown sugar turkey sausages. There’s a two-night required stay at $200/night.

One morning, I took up Don’s generous offer to give me a kayak guided tour of the Nisqually estuary. A twenty-minute paddle from the inn brought us about a hundred yards from a herd of resting harbor seals (see the photo at the top of the post). The glass-calm waters eased my nervousness about bringing along my camera gear—and nothing beats getting a close-up view of wildlife than from a kayak! 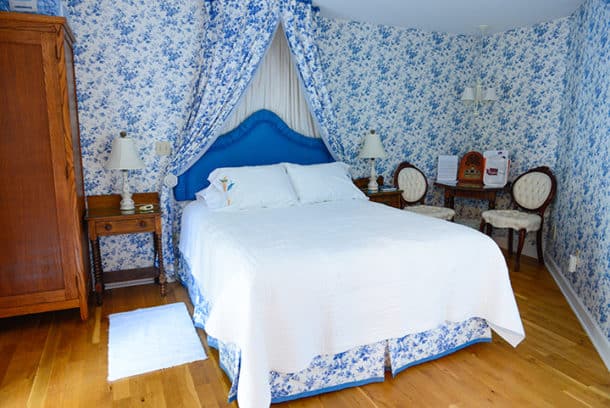 Olympic Room at the Inn at Mallard Cove 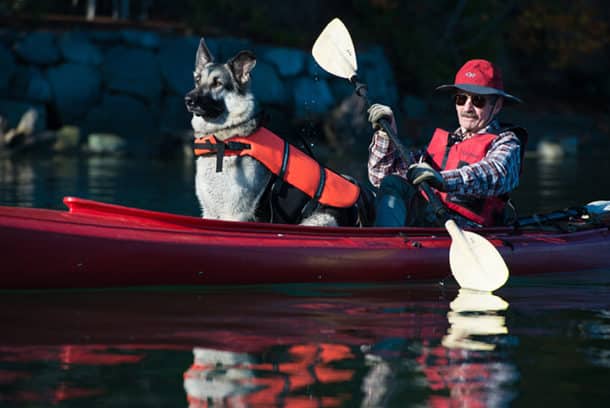 Early morning kayak tour with the Inn at Mallard Cove innkeeper Don and his shepherd, Baron 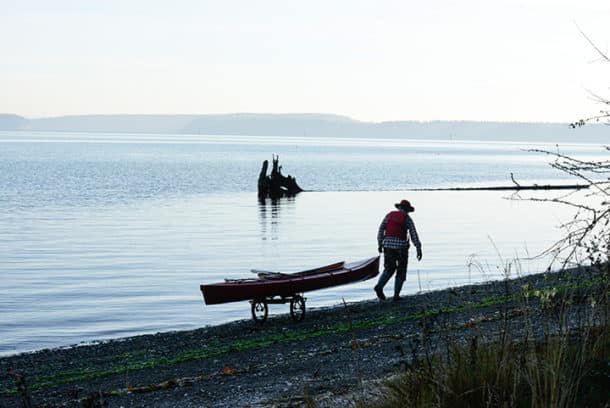 Don, the innkeeper, gets the kayaks ready at Mallard Cove

I spent the rest of the day exploring downtown Olympia. I didn’t stray much beyond the main drag of Capitol Way but there was a lot to choose from, even on a Sunday. Among the stops along the way was Archibald Sisters, a store founded by two sisters and one of their husbands in 1975 that specializes in making its own lotions and fragrances. There’s also a large inventory of quirky gifts.

Hot Toddy is a fun, funky vintage-inspired clothing boutique that’s in its 12th year. Owned and run by two women, Sydney and Erika. I got to talk with Erika a bit and we shared Jersey stories (I’m from Trenton, she moved out here from Parsippany).

Around the corner is the historic Capital Theater, built in 1924. Run by the Olympia Film Society since 1986 the theater shows independent, international and classic films year-round; offers special live performances; and produces the Olympia Film Festival.

Across from the theater is Burial Grounds coffee house. It’s a bit foreboding from the outside but inside it’s a warm and friendly space. In fact, the Burial Grounds mission statement is to provide a welcoming environment to anyone who walks through the door—even if they’re an outsider and a little square like I am.

The Olympia Farmers Market, celebrating its 43rd season in 2018, is a vibrant and colorful place to spend a few hours. Here you’ll find local and organically grown produce, meat, fish, clams and oysters, cut flowers, baked goods, artisan and handmade crafts, and live entertainment. I met lovely people like vendor Amy Healy. With the help of her niece Kaci, she sells her line of organic fabric totes, pouches, and accessories imprinted with leafy patterns that “celebrate the beauty of the Pacific Northwest.” The market is open year-round but with reduced hours during the winter. 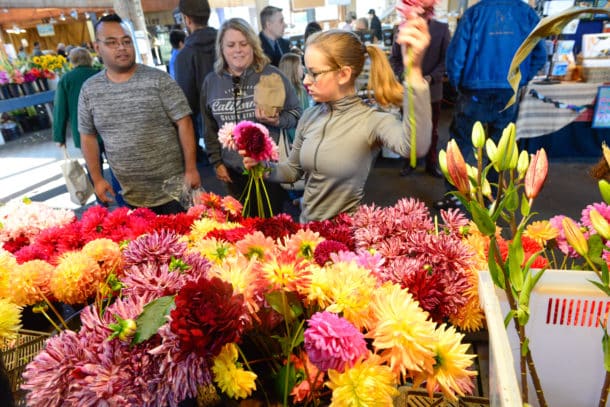 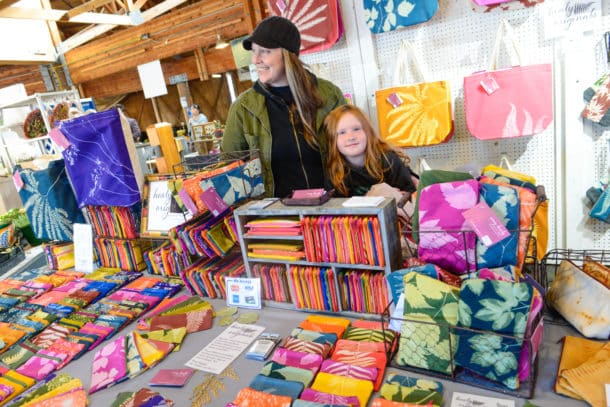 Vendor Amy Healy, with the help of her niece Kaci, sells Healy Originals at the Olympia Farmers Market 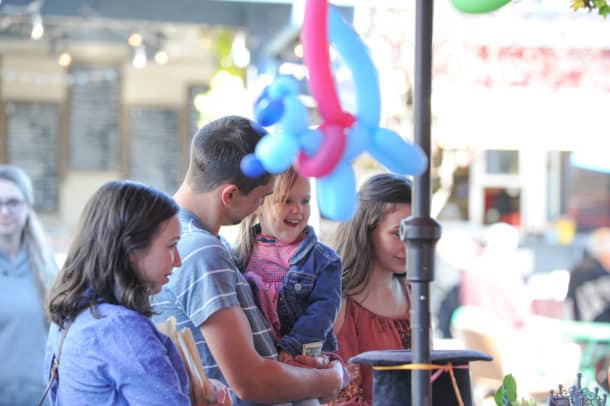 A short walking distance from the farmers market is Percival Landing Park and the Olympia Waterfront, a pleasant, open-air space ideal for picnicking, throwing a frisbee, or watching playful harbor seals swim around the marina.

The last daylight hours of the day I spent at Chelsea Farms, a boutique shellfish farm established in 1987 and run by Shina Wysocki and her brother Kyle Lentz. As the tide was going out in the Eld and Totten Inlet of South Puget Sound, Shina explained how the pair’s late father originated the “tide-tumbled” method of growing oysters.

It works like this: Bags of growing oysters are suspended by buoys so that they rise and fall with the tides, which has effects on the oysters’ growth and their final flavors. Continuing their family tradition of organic farming, Shina and Kyle pride themselves on practicing and promoting environmental sustainability. This, they say, is a key to keeping the region’s waters clean.

In 2016 the two opened Chelsea Farms Oyster Bar in downtown Olympia, the area’s only true raw bar. All of their award-winning shellfish—like “Bonita,” Olympia” and “Totten”—all possess unique flavor profiles, but my favorite was the “Chelsea Gem,” their signature oyster (mild, buttery, briny).

The most intriguing and tasty dish, though, was the “Geoduck Crudo,” in which the not-so-pretty geoduck clam is attractively prepared: sliced paper-thin and served on an ancho-chile-oil-brushed slate with cilantro and lime. The pork-belly-flavored chowder was a meal unto itself, with no fewer than 20 intact clams stuffed in.


One evening, for a little seasonal fun, I ventured outside Olympia and drove 30 miles to the little town of Tenino to go on a cemetery tour. As a fundraiser for their local museum, descendants of locals now deceased and buried in the Forest Grove Cemetery dressed in period clothing and gave visitors a history lesson full of stories of colorful past residents.

Route 101 and the ferry to Whidbey Island…

After two days in Olympia, my tight itinerary pushed me north to Whidbey Island. Originally, I had planned to take the three-hour, heavily traveled and more inland Interstate 5 drive to Deception Pass, comprised of two two-lane bridges that join Whidbey Island to Fidalgo Island. But during my lunch at Ricardo’s Kitchen and Bar, a young waitress convinced me to instead take the more scenic coastal route of Route 101 to Port Townsend.

Kamila, a Skokomish tribe descendant, spoke passionately about the beauty of this drive and how it hugged the winding edge of Puget Sound to the right and towering pine forests to the left. (The Skokomish reservation is also located along this route.)

Passing up the chance to cross Deception Pass was a bit of a bummer, but I had no regrets. The less-traveled Route 101 offered breathtaking beauty topped off by a sunset crossing on the ferry ($9.15 one-way for one vehicle with driver) to Coupeville, Whidbey Island. 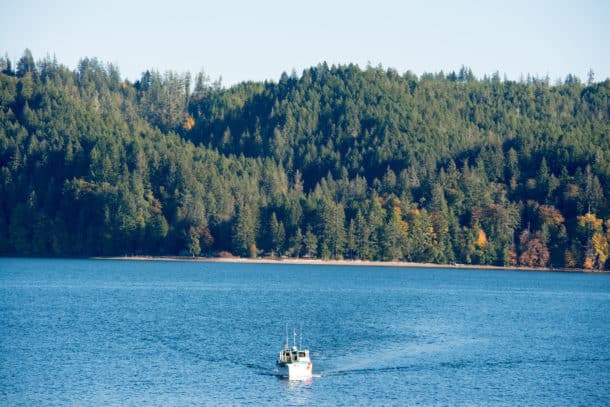 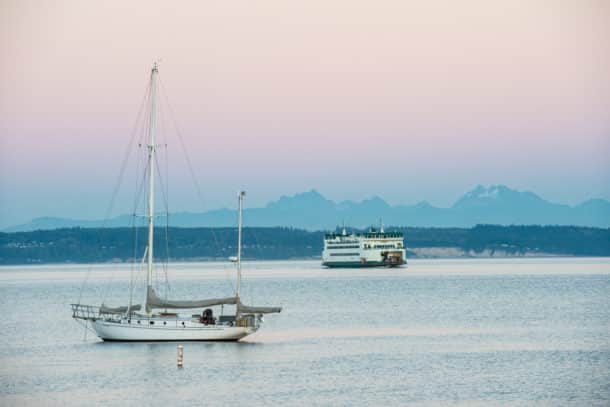 The ferry to Port Townsend from Coupeville, Whidbey Island 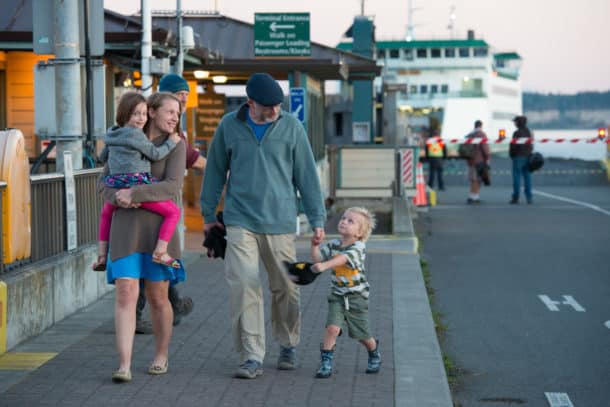 Passengers disembark from the ferry at Port Townsend