Sun, golf and rental cars at the 2014 PGA Merchandise Show

A month into 2014, paralyzing cold fronts continue to paint life blue across much of North America. Flights are being cancelled. Classes are being cancelled. If not for the efforts of unsung heroes like beet juice, life itself may just have been frozen still. Yes, things are pretty bleak—but not in Florida!

And so without much knowledge of the assignment I was accepting, I departed Brooklyn for sunny Orlando last week with a smile on my face. By the time I returned, I knew the assignment well, and fortunately, I was still smiling. The 2014 PGA Merchandise Show and sponsor National Car Rental had taught me well. Here’s what I learned from three days behind the wheel at the “Major of Golf Business”:

1. The 2014 PGA Merchandise Show is fun even if you don’t love golf
Running January 21-24 this year, the PGA Merchandise Show is about as big as it gets in the world of golf. Each year, the show directs the eyes, ears and wallets of all of the sport’s biggest players to Orlando’s Orange County Exhibition Center, and for three days, the limits of golf seem to stretch far beyond the center’s massive 22-acre confines.

This year, as every year, tens of thousands of enraptured golfers were awarded first go at the new clubs (like the Nike “Covert” driver, which has 15 different club configurations), balls, bags and more of more than 1,000 vendors. Independent innovators, empowered by the non-profit United Inventors Association, were given floor space to help players fine-tune their games in the cleverest of ways, like with a laser that attaches to your putter to help straighten your stroke.

Decision-makers like Ted Bishop, President of the PGA of America, and professional fool Donald Trump (he’s a viciously successful golf course developer, as well) were on hand to discuss the game’s most pressing issues (like what to do about the belly putter and the effects of the 2016 Olympics). And that was just the half of it, because this truly colossal (and frankly overwhelming) exhibition also featured stalls mixing complimentary drinks, giving away GoPros (GoPro did that), hosting putting challenges and/or cornhole, and much more.

The exhibition, of course, was inside the exhibition center—but Demo Day was not. The day before the main, indoor exhibition opened with a ceremonial drive from Annika Sorenstam, attendees were able to enjoy the game they love beneath (mostly) perfect skies as vendors set up stalls around a massive 360-degree driving range. An open invitation to swing away with the latest and greatest clubs—which was pretty awesome in itself—was then complimented by chipping contests, food trucks, demonstrations (like one by long-drive champion Jamie Sadlowski) and drinks of all kinds.

For people who love golf, the show is heaven. I more like golf, and don’t play often, and I still had a great time. I think you only need about a 4/10 on the “How you feel about golf” scale (where 10 is an insane, irrational love) to really enjoy yourself here.

The traveler in me (and I’m for sure more a traveler than a golfer) also found overlapping enjoyment in many of the stalls angling to market different countries/territories as golf destinations—Scotland, Ireland, Wales and Mexico among them. As John Kim of PGA.com noted, “There’s nothing here that doesn’t touch on golfers’ desire to travel.”

2. The National ProAm Series will be good for golf, and golfers
I mentioned I was here to cover National Car Rental as well, yes? Well, National is the Official Rental Car of the PGA of America, and among the many things introduced at the Merchandise Show (along with the amazing and affordable Game Golf) was the National Car Rental PGA ProAm Series. It’s a pretty cool idea, and a brilliant collaboration between two partners that on paper seem to share only a fondness for green.

Basically, the Series will link together 82 new and existing ProAm events across the country between February and October—both by providing funding and golf infrastructure and literally via the tires of the “Go Like A Pro” customized tour bus. To roughly half of the tournaments, said bus will roll with it a sort of Business Class golf experience built around the expertise of one of the best father-son duos in any business: Mark and Keegan Bradley. PGA Pro Mark will lend his years of actually understanding golf to participants via a series of online tips, while 2011 PGA Championship winner Keegan will be there in the form of a replica golf bag—and his own golf swings.

One of the highlights of the bus has to be the traveling TrackMan, a piece of golf-perfecting technology without equal in today’s game—and so retailing fully-equipped at an all-too-elusive $24,995. Participants in all of the tournaments where the bus stops will get free access to the device, which uses tech developed by NASA to analyze every aspect of a golf swing with staggering efficacy, and if they feel like then battering their self-confidence, they can compare their swings with Keegan’s own. Club demos and care services will travel as well, as will an opportunity for one tournament-winning group to win an all-expenses paid VIP golf experience with Mark and Keegan. As long as they’re enrolled in National’s Emerald Club (free), that is.

In a sense, it’s a motor vehicle for temporary use, and that temporary use is connecting the game of golf to the people who love it. Here’s the full schedule of all 82 ProAm events, the first of which is set to kick off on February 17 at Canton Country Club in Canton, MS.

3. National Car Rental is the business car rental option, and that makes sense
National, as I heard from assistant vice president of marketing Rob Connors at the show, is a car rental service for businesspeople. I hadn’t really considered the possibility of subsegments within the rental car market until that moment, but alas—and if there was any truth to this proposition, then the sport of businesspeople, golf, seemed a perfect fit.

As Grantland Rice once said, “Eighteen holes of match or medal play will teach you more about your foe than will 18 years of dealing with him across a desk.” PGA.com’s Kim summoned these exact words as he explored the true depths of his love for the game, and for good reason. Even as an overly casual golfer, I can say that part of the real pleasure I find in a round of golf is in the vacuum of intimacy it creates. On a good day, the infinite patience of the natural environment sets the pace, and the camaraderie comes easy—if it’s not required.

In some sense, spending four hours with someone on the golf course, with nowhere to go, is like a long road trip. But while that may just be reaching for the parallels, there is very real support for the idea of National as a specifically business, and so golf-suited, car rental option. The best-scoring rental service in the 2013 J.D. Power North American Rental Car Satisfaction Study listens to its customers, and specifically to its business travelers, to the point that Connors describes the service as “designed by business travelers.”

And so seemingly with the business traveler in mind, it’s all about maximizing ease of use, convenience and flexibility at National, even if that comes at a slightly higher cost. I had a full-size sedan (actually a choice between two) waiting for me at the Orlando airport (MCO), and so I got to try the service out for the first time as I made my way to the Hilton Orlando where I’d be spending my nights. Though I had to walk a bit to find the rental car area, it was actually an insanely easy process.

At about 2:30 pm, there was no line at the National desk (while there were lines at other desks). I showed my license, signed a form, declined the insurance (which was a stupid move; you should always get some sort of insurance package since it’s so cheap and you just never know), and was cheerily pointed towards two vehicles I’d be able to choose from—one too red, one too blue. Disregarding what I’d learned from The Matrix, I chose blue. I was then confused about what was next. I don’t rent a lot of cars.

Next, of course, was to drive away. Directed by the agent conveniently floating by, I found the car unlocked and the keys on the dashboard. I started the engine, found myself a radio station without country music and drove up to the gate, where I was only asked to show the paperwork I’d just been given and my license again. From there, it was off to the hotel.

I had a toll pass inclusion, meaning I could just drive through fast lanes of the two tolls I passed without having to stop or even slow down. This was kind of disconcerting, as there was no indication I wasn’t simply piling up points on my license, but now that I can safely confirm that wasn’t the case, I can say that a toll pass inclusion is a great way to make things easier and more convenient, for business travelers or really anyone. On the other end (the return, where everyone’s business is the same: a flight), I was able to simply drop off the car in the National line, get a quick okay from the agent and be working the self-check-in Delta machine in the span of maybe a minute. Truly.

Most telling of all, as told by Rob, National’s mobile app was literally built around the direct feedback of 300 business travelers, and so it now offers an even more targeted extension of National’s car rental service—like information on how to get to the National desk from your airport terminal and the ability to book a car on the move.

All pretty cool if you’re in need of a rental car, and your business can’t wait—or you have a tee time to make. 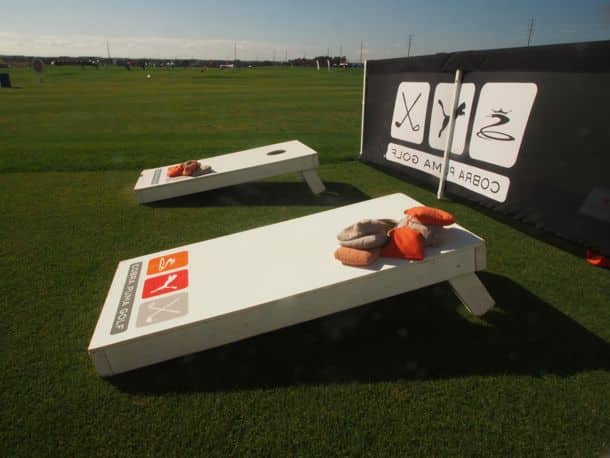 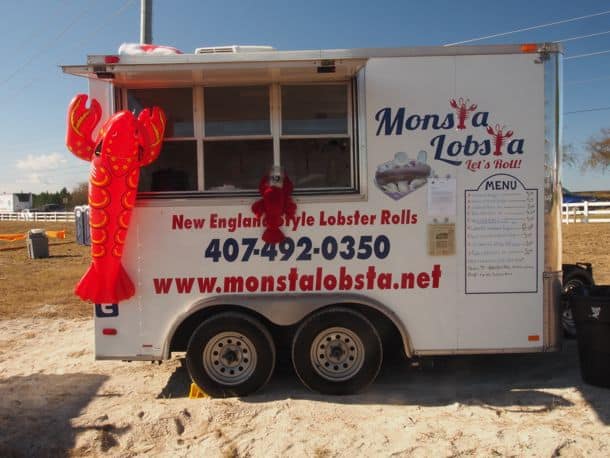 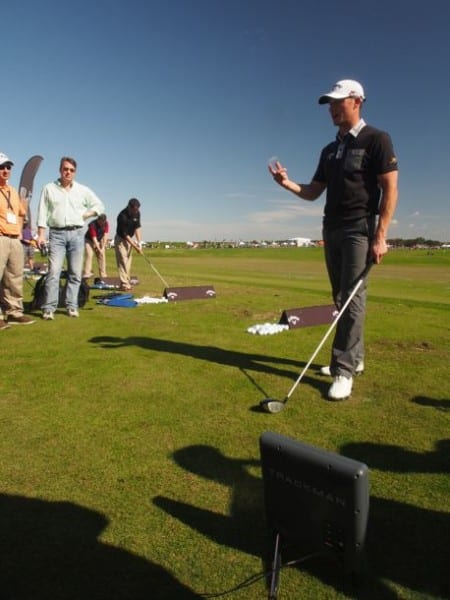 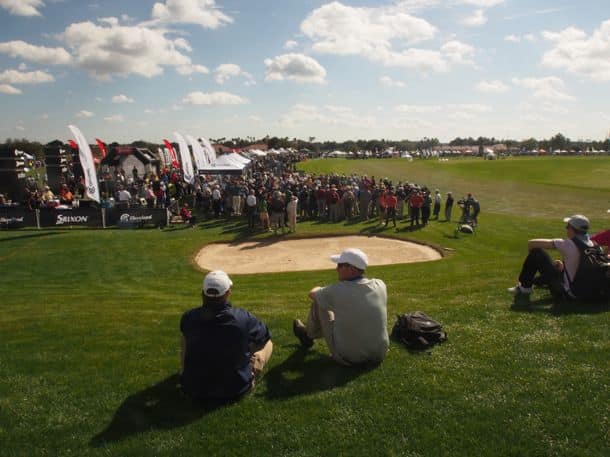 Soaking up the sun on Demo Day in Orlando 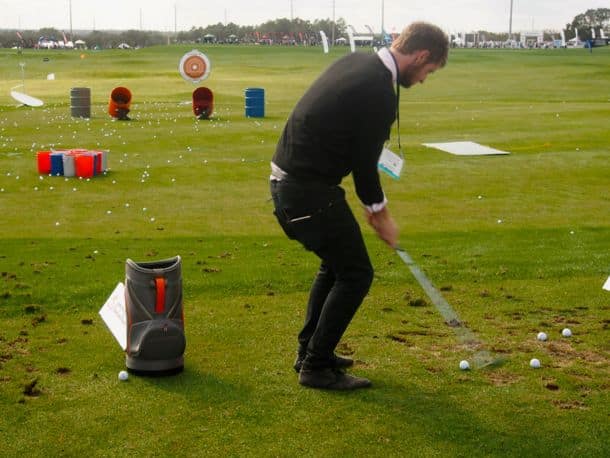 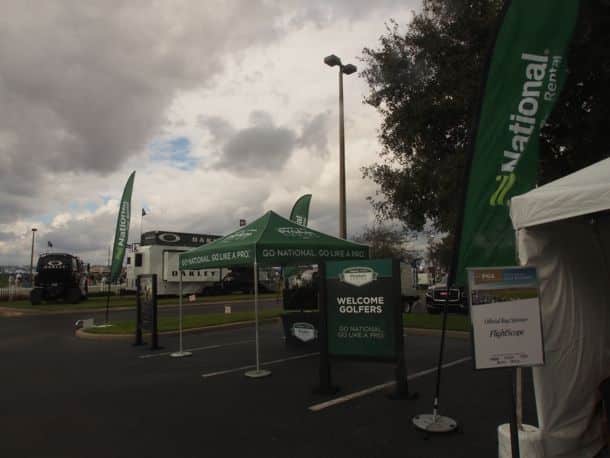 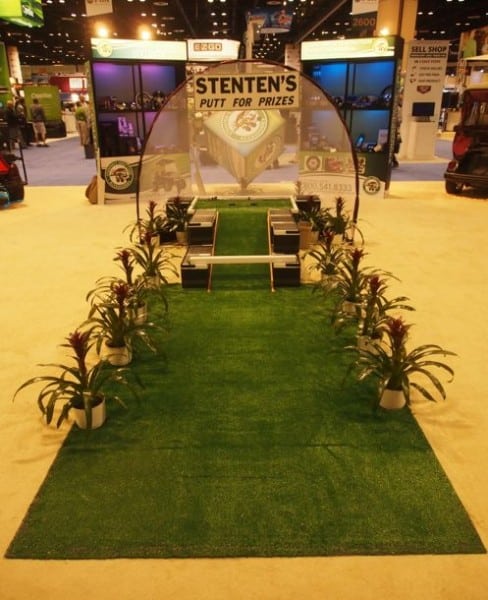 Putt for prizes at the show 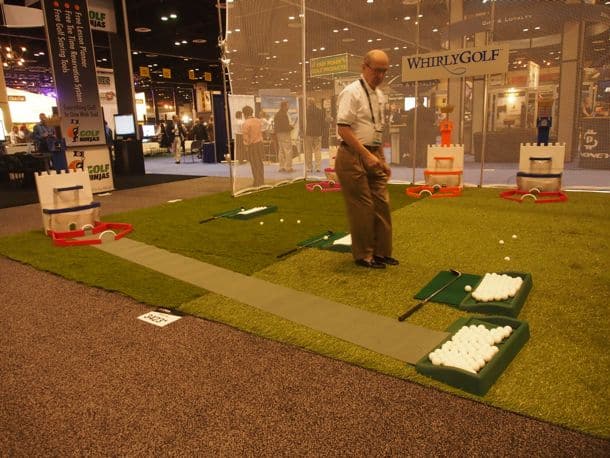 Whirly Golf at the show 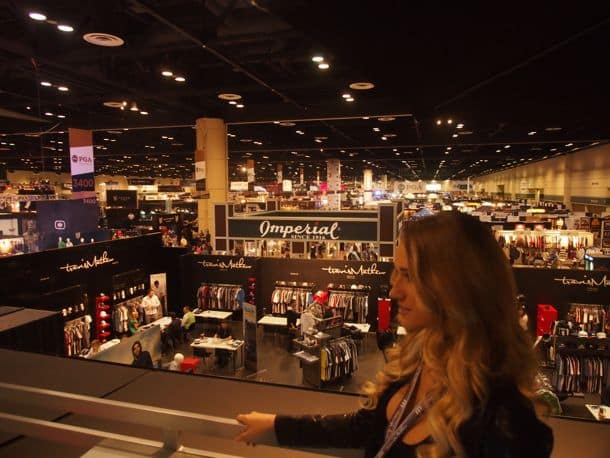 The show from above 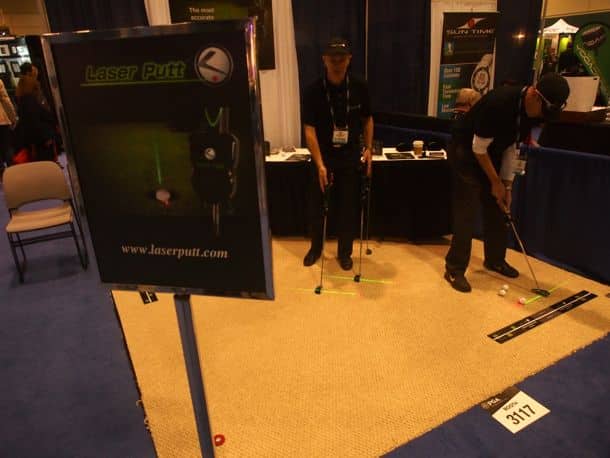 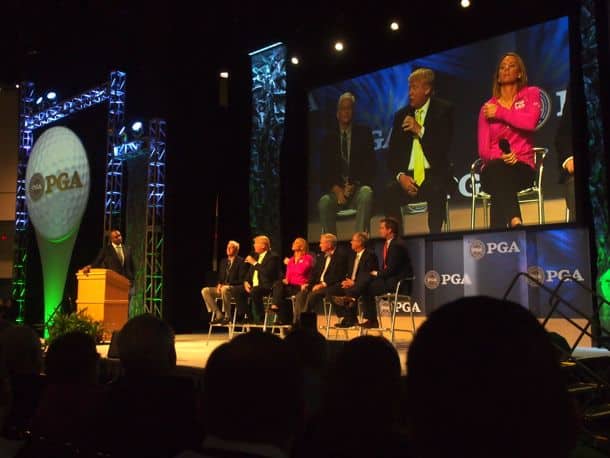 State of the Industry panel 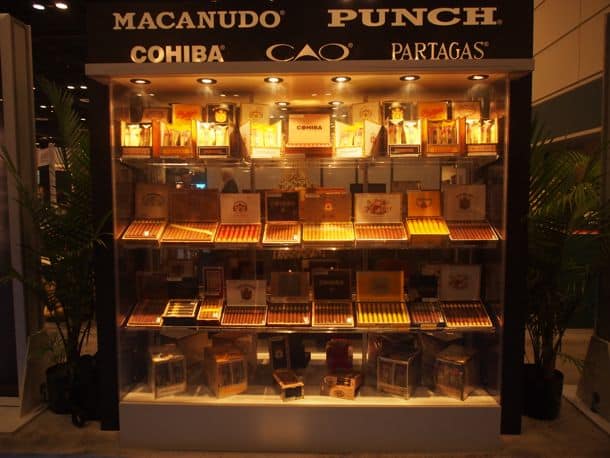 1 Comment On "Sun, golf and rental cars at the 2014 PGA Merchandise Show" 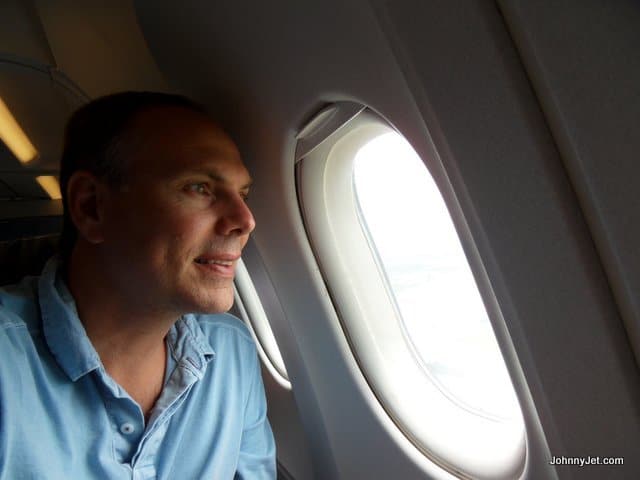 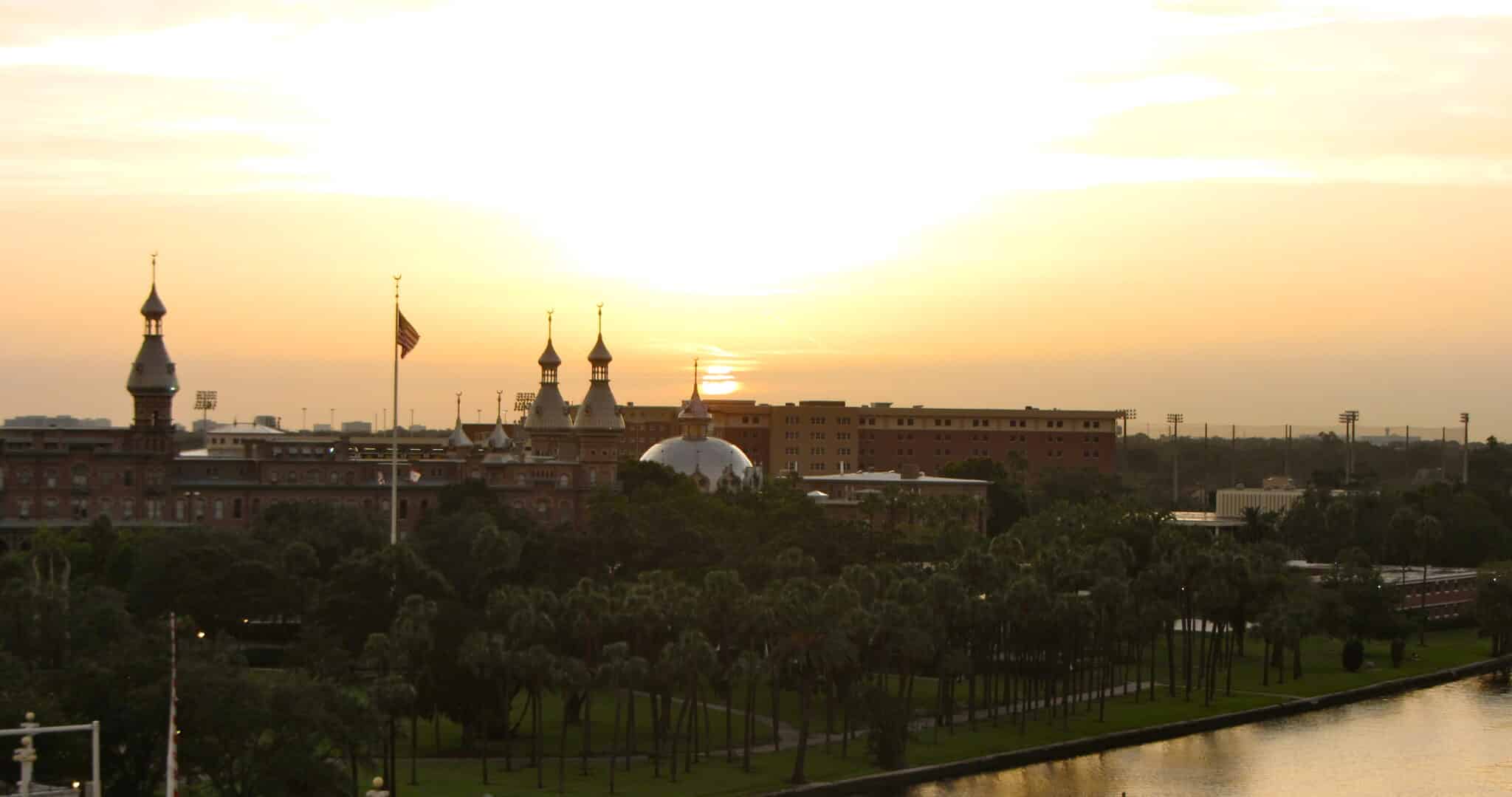