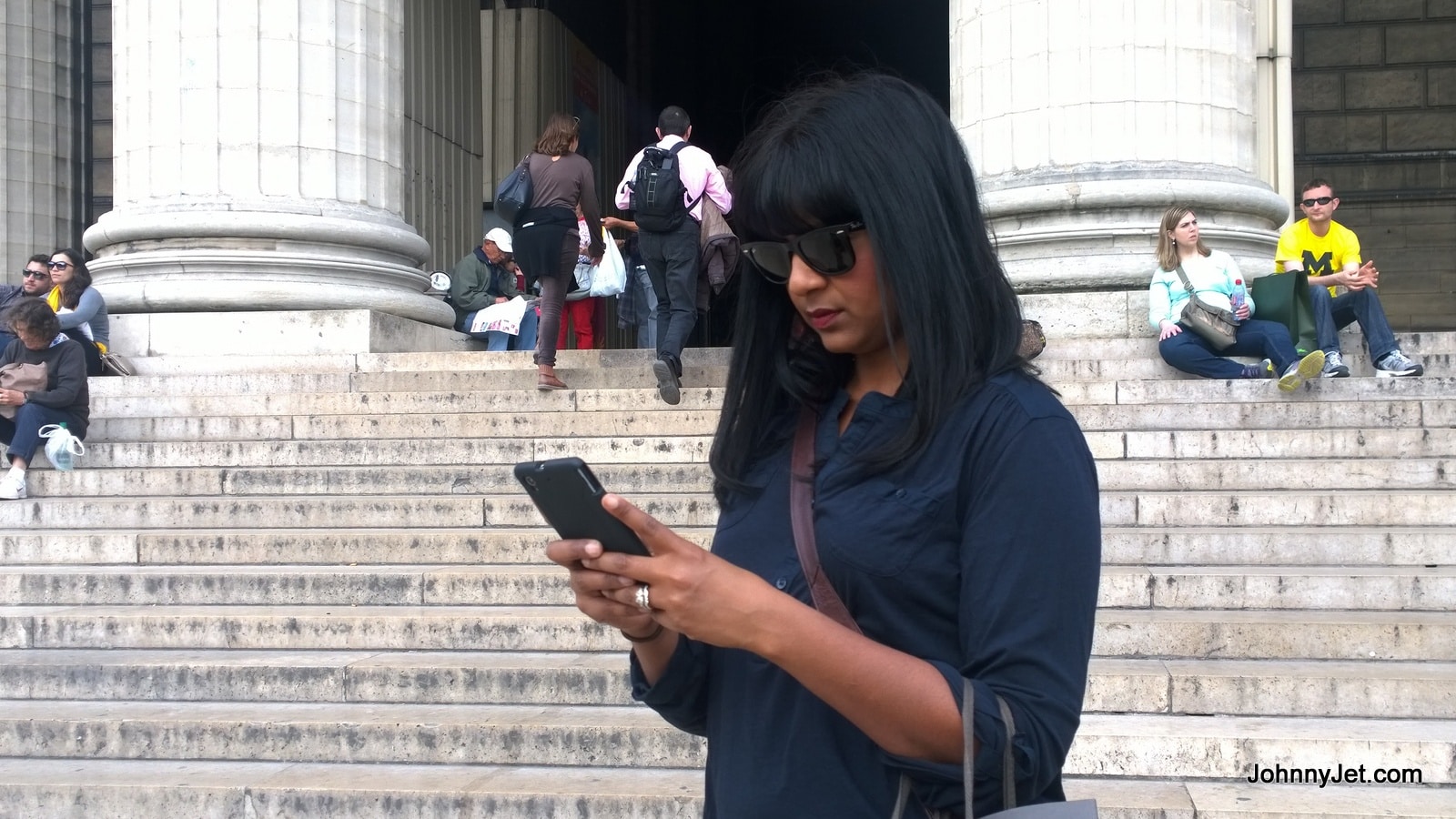 If you’re hitting the road this summer you will want to download the best travels apps to help make your travels go cheaper, smoother and safer. Tip: If you are traveling internationally, make sure that you have a great data plan. Call your service provider before departing.

1. Uber/Lyft
I know some people have a problem with Uber and Lyft but I love them. I’ve used uberX all over the world and Lyft several times in the US. They not only make it so much cheaper to get from point A to point B but also make it a whole lot easier. I recently spent 30 minutes trying to order a taxi for my buddy Mike to pick him up at my house near LAX. I couldn’t get a single company to answer the phone (I tried three separate taxi companies) and when I finally did place an order, the taxi never showed up. No exaggeration. Uber isn’t perfect either, though, which is why I created this list of 10 Uber tips that will totally improve your next experience.

Save: If you haven’t tried either service but want to, here’s an Uber promo code that’s good for up to $20 off your first ride: UberJohnnyJet. For Lyft, my code is for $50 is Johnny1827.

2. Waze
Whether I’m driving or using a car-sharing service, I use Waze, which works pretty much all around the world. I use it mostly to find the quickest route from point A to point B and what I love most about it is that it outsmarts traffic and gets every user the best route to his or her destination. It also alerts you before you approach police, accidents and road hazards. What I hate about it is that it sometimes takes you into bad sections of town and makes you do a crazy number of turns as it weaves you through the city. And sometimes, it only saves you a minute or so. I always check the routes first.

3. Rome2rio
Rome2rio is a very useable tool that, as they say, “searches any city, town, landmark, attraction or address across the globe with thousands of multi-modal routes to easily get you from A to B.” I use it all the time to figure out the cheapest way to get somewhere, as it even lists prices for Uber, taxis, trains, etc.

4. Mobile Passport
One of the best things to come to international travel in a while is Global Entry, which has kept me out of many long customs lines returning home. It’s well worth the $100 cost (good for five years). Well, now US citizens with a valid US passport and Canadian citizens with both a valid Canadian passport and B1 or B2 visa status can get what is essentially a free version of Global Entry for travel through Atlanta, Chicago (ORD), Dallas (DFW), Fort Lauderdale, Newark, Miami, San Francisco, and Seattle international airports (San Jose is coming soon). It’s called Mobile Passport and it’s an app for iOS and Android created by the US government that lets you skip the usual customs line at US airports. Just fill out your profile and answer the CBP’s questions—and then go straight through the Mobile Passport Control express lane at the airport!

5. Google Translate
When people tell me they don’t travel internationally because they’re afraid they won’t be able to communicate with the locals, I just look at them like they’re from Mars. I’ve been all over the world and I don’t speak a language other than English and I’ve only had a problem a handful of times…and that’s before I had Google Translate. The free app (iPhone and Android) allows users to translate 90 languages by typing in a word, sentence or paragraph. There’s also two-way automatic speech translation in 40 languages. One of my favorite features is that the app also allows travelers to translate any text including street signs and menus in 26 languages just by holding up their cameras—all without an internet connection.

6. XE Currency App
The XE Currency App has rates and charts just like the XE website, but it’s optimized for phones. If you aren’t familiar with XE, it’s a useful tool for converting currencies from all over the world. It gives users a better understanding of how much cash they should expect to receive when exchanging (before fees). Note: None of the currency exchanges are completely accurate, according to Bank of America. I learned that the hard way when I recently made an international money transfer.

7. SignEasy
Don’t you hate it when you’re on the road and you get an email that requires you to print, sign and scan a document—and they need it ASAP? It’s not only going to ruin part of your day trying to get this done but it’s also going to cost you a good penny, too. Well, SignEasy can help. This easy-to-use app allows you to digitally sign documents anywhere in the world straight from your mobile device in no time. You’ll save time, money and paper. SignEasy is available for iPhone, Android and BlackBerry. The first five signs are free and then they charge: $4.99 for 10 documents and $39.99 for one year of unlimited docs.

8. STAYconnect
STAYconnect (for iPhone and Android) is a must-download for germaphobes (me), anyone who can’t figure out how to work the TV remote control (my dad), and those who want to find the channel of the network they’re looking for immediately. The app lets you use your smartphone as a TV remote, and it’s free to download and easy to use. Once you open it up, STAYconnect will ask for the code to your hotel TV. When I tried it (see video in this post), I had no idea where to get the code so I hit the big question mark at the bottom and was told to press the menu button on the remote. I did that, and then the TV directed me to press the numeral one. I did and a six-digit code popped up. I entered it into my phone, and voila! I was then connected and controlling the hotel TV from my iPhone. Once you’re synced, you can not only change the channel, but adjust the volume and power the whole thing on or off, as well. I turned the TV on from about a hundred yards down the hall. Only one device can be connected at a time but it’s easy to kick the last person off. Watch my video for more.

9. Magnifying Glass With Light
My dad couldn’t read a restaurant’s menu one night because: a) the print was way too small, and b) it was too dark. I could barely read the text myself, and I’m half his age. I figured there had to be an app out there to help—since there’s pretty much one for everything—and sure enough, there is! It appears Magnifying Glass With Light is only available on iOS but Android has a similar one. Just open Magnifying Glass With Light, point your phone’s camera at the menu or whatever else you want to read, move the on-screen slider, and voilá: You’ll have large, easy-to-read text, just like that.

10. AirHelp
AirHelp is a brilliant website, app and service that will help airline passengers around the world secure compensation for delayed, cancelled or overbooked flights in or to and from the European Union. AirHelp is an airline’s worst nightmare because it fights for those who are unsure of their rights, or lack the time, confidence or expertise to embark on a claims process independently. It doesn’t cost a thing if they don’t get you cash but if they do, they get 25% of your reward, which seems fair to me. I used them to get money back from a BUD-LHR-YYZ flight that the airline originally told me that I wasn’t due any money for. But then I tried AirHelp a-year-and-a-half later (you can do it up to three years after the flight in question) and received a check for $900 US!

11. TripIt Pro
This is one of my personal favorite apps because it notifies me of flight delays, cancellations and gate changes even before the airline does. And oftentimes, I know of these changes before the gate agents know! TripIt Pro also helps you keep track of reward points, notifies you when you’re eligible for a flight refund and lets you know when the seat you want becomes available. It has many other features as well, but ultimately, this is the app that every traveler needs to have to make their travels smooth and stress-free.

7 Comments On "The 12 Apps Every Traveler Needs to Download"