The Best Taxi Driver in the World? 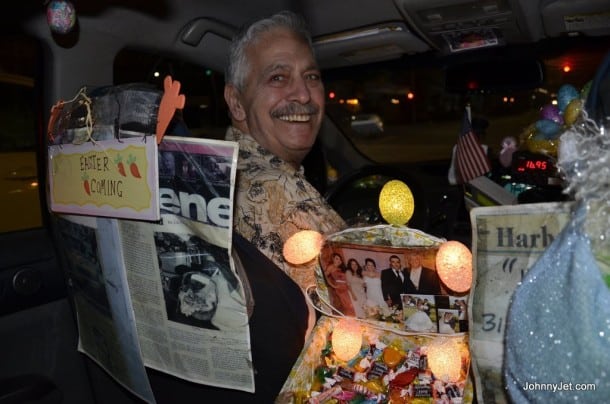 When my usual taxi driver didn’t answer his phone, I called Kenny the Cab Driver at my cousin Joey’s recommendation. He’s a local legend in the South Bay because he’s so friendly, decorates the interior and exterior of his cab during the holidays and plays rock ‘n’ roll music. I’ve seen his taxi many times but had never taken a ride … and that was my loss.

Luckily, I didn’t go through my entire life without meeting Kenny. He’s truly a special man who loves people and his family. Kenny’s from Jordan and married a Mexican woman and has photos of his family in the car, along with free candy!

When I handed him the cash with a 30% tip, he said it was too much, then he carried my bags to the door and hugged me goodbye. I heard he does it for everyone. And he told my buddy Kevin from PubClub.com that he doesn’t look at himself as being a taxi driver. Instead he’s just a friend giving another friend a ride so they can get where they are going safely and have a good time.

I asked Kenny if any LAX cops have ever pulled him over since they seem to have a habit of doing it at LAX and he told me it had happened once, a few years ago. When I asked why, he said that the motorcycle cop had said he’d been waiting for him all morning and he just wanted to take a picture with him. I’m not surprised.

I only wish we had more Kennys in this world.

1 Comment On "The Best Taxi Driver in the World?"