The Black Point Inn, Prout’s Neck, Maine: An Inn to Come Home to

From the moment Cam and I stepped up onto the landing of the 135-year-old Black Point Inn, and Mike opened the door with a warm hello, there was a familiar—almost familial—feeling. Wanda smiled above the reception desk and Cathy (Mike’s wife) said “Good afternoon,” and offered us a cup of tea or coffee. It was so genuine that I looked around and wondered if they were talking to someone behind us or had mistaken us for people who had been coming to the 25-room inn for years!

And people do and have. One woman, in her nineties, has been coming to the Black Point Inn for the entire month of July since she was a little girl. The loyal employees have a history, too. Phil, the GM who’s now in his thirties, has been with the Migis Hotel Group, which manages the Black Point Inn, since he was a teenager. Other Maine Migis properties include Migis Lodge in Sebago Lake, The Inn at Ocean’s Edge in Lincolnville, and Colonial Inn in Ogunquit.

Our room was #215, a newly renovated suite with antique furnishings, historic style fabrics and the most comfortable beds. The modern bathroom had a walk-in shower large enough for an entire family, with tiles that mimicked the colors of the Atlantic Ocean.

The servers in the Chart Room bar and dining room, overlooking Sand Dollar Beach, were equally friendly. We enjoyed our breakfast here, had one memorable lunch on the deck, and a classic New England dinner of Damariscotta oysters, seafood chowder and lobsters. We tried Portland’s Shipyard Summer Ale, and Mt. Gay Mojitos—a taste of the Caribbean in Maine. For breakfast, I loved the eggs benedict with smoked salmon instead of ham, and Highroad Cam enjoyed his coffee in the hand-thrown clay mugs and the “Wake Up Call”—eggs, bacon, toast and jam.

That first morning, we could have lingered in the Chart Room, or sipped our coffees on the deck overlooking the beach, but we were off to explore the area, starting with the Cliff Walk that encircles Prout’s Neck and offered one famous artist the views that helped him gain that notoriety. The Chart Room and The Point (fine dining overlooking the Atlantic Ocean) are open to the public for breakfast, lunch and dinner.

The Cliff Walk is the scenic and slightly challenging walk that surrounds Prout’s Neck, accessible from a path across from the Black Point Inn. The 45-minute walk meanders along the shore and traverses across rocky beaches.

Interesting sea birds like Eider ducks, gulls and Piping Plovers can be heard and seen. The best part was walking over the actual giant slabs of granite rocks that Winslow Homer immortalized in his masterful paintings and seeing his actual studio perched on the coast—only a stone’s throw away!

Witnessing the actual views and recognizing them from his magnificent paintings was surreal. The color of the Atlantic Ocean can go from dark green on a stormy gray day, to a sun-warmed Cerulean blue, like the ocean in Winslow’s paintings. When Winslow lived on Prout’s Neck there were five hotels; now it is a quiet residential community and only the Black Point Inn prevails.

Later, we took a yoga class on the front lawn, and then took Beach Cruiser bikes to nearby Scarborough beach past the private Prout’s Neck 18-hole golf course, available to guests of the BPI. The beach was picturesque, what Maine is known for, with a small colorful dinghy resting on the sand—not locked-up, like an Edward Hopper painting. In fact, everywhere you look is a scenic backdrop for a painting on Prout’s Neck.

Portland  is only 20 minutes away if you crave an urban infusion during your peaceful BPI retreat. I visited the world class Portland Museum of Art and through the PM of A was able to get a guided tour inside Winslow Homer’s Art Studio back on Prout’s Neck. The Black Point Inn offers a weekend studio tour package.

Relaxing at the Black Point Inn amidst the spectacular scenery is my idea of a perfect vacation!

Read a book on the deck, have a cocktail in front of the stone fireplace, take a swim at their saltwater pool, and soak in the ambience—what guests have been doing for over a century. 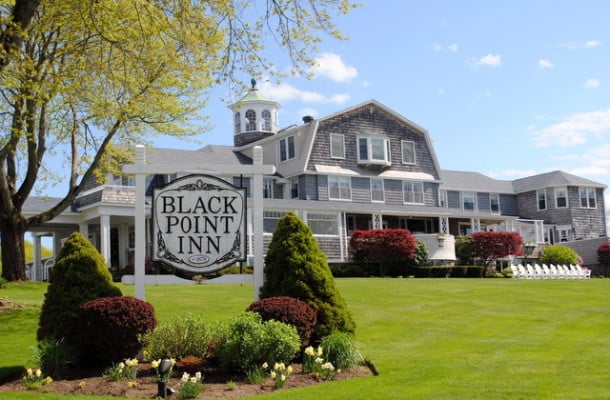 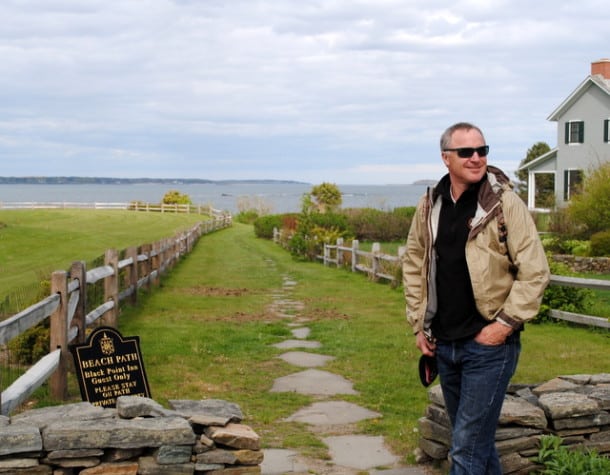 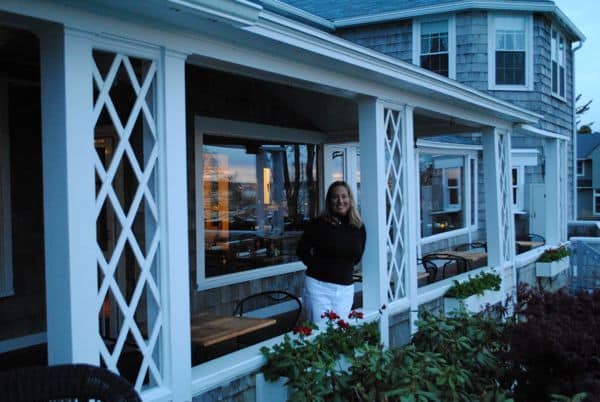 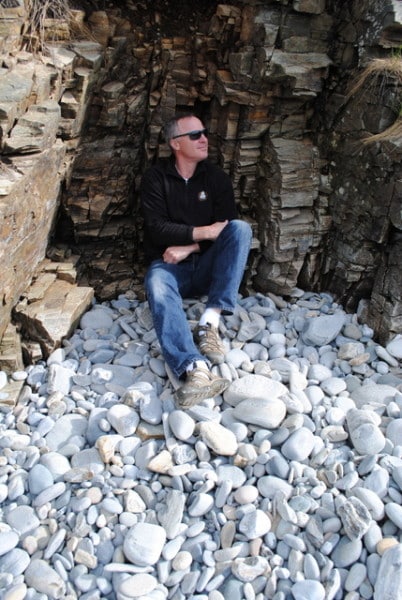 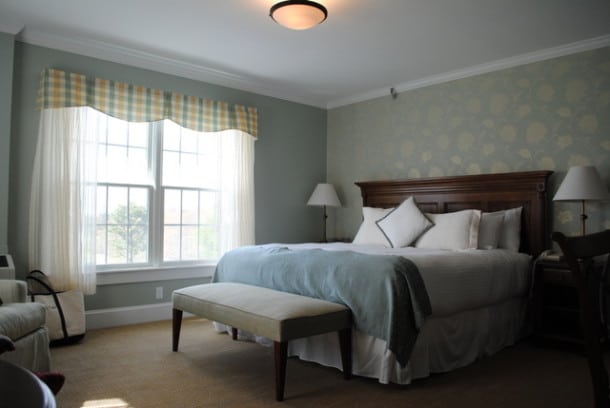 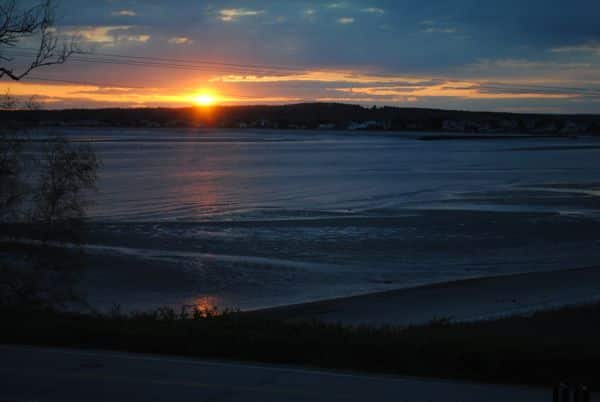 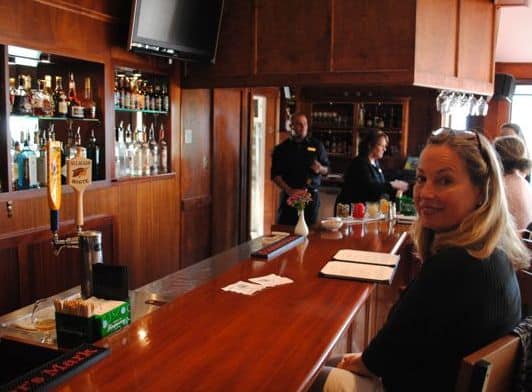 Georgie Jet in the Chart Room 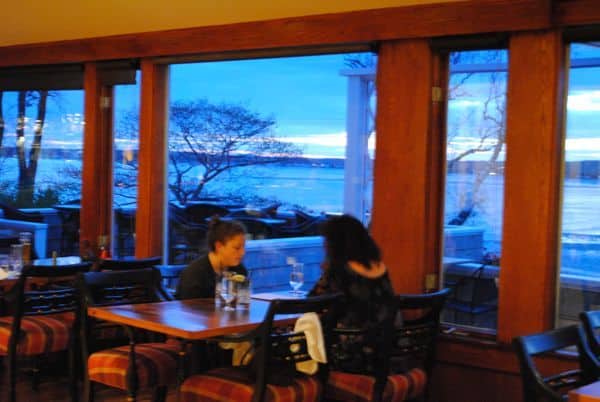 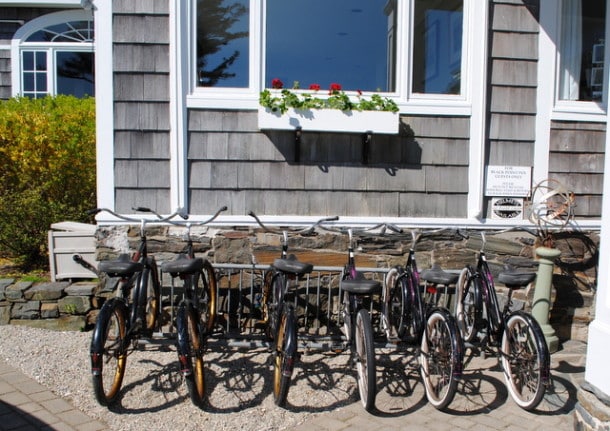 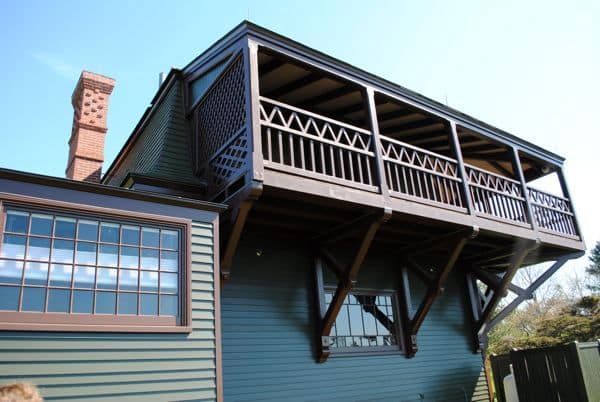 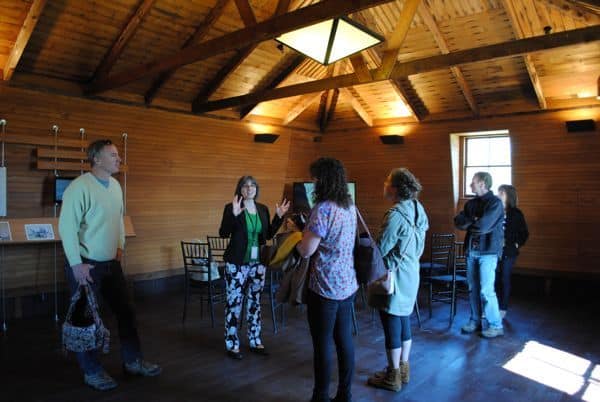 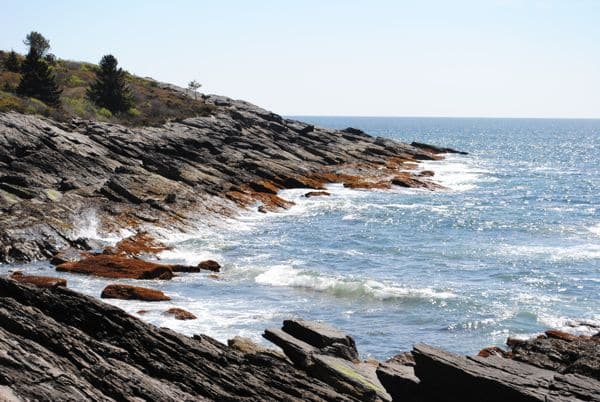 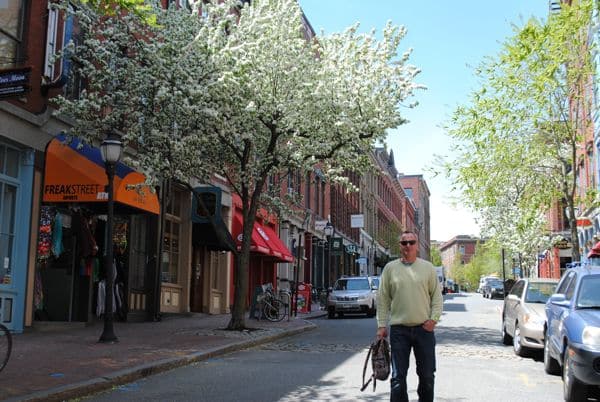 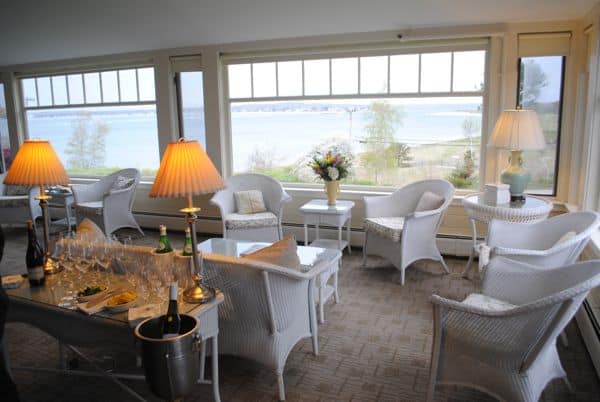 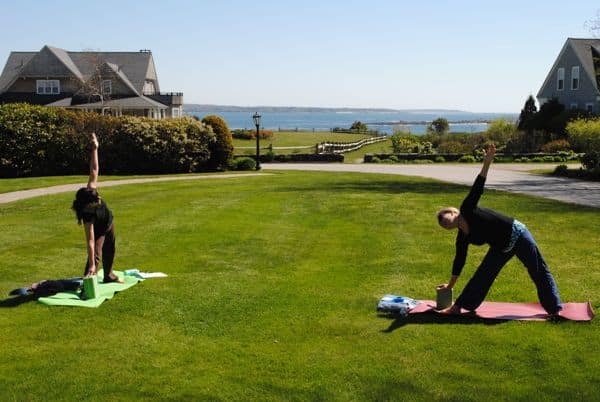 Yoga on the lawn 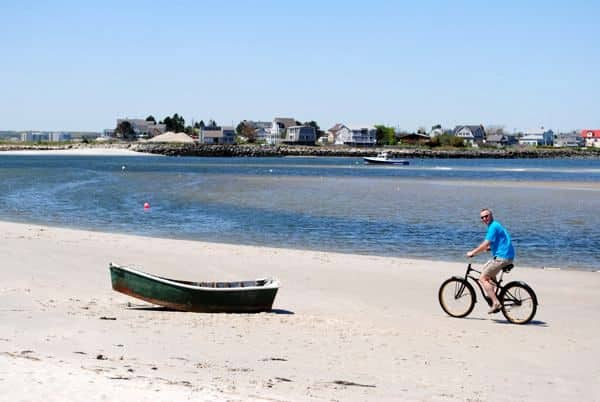 Highroad Cam on the Beach 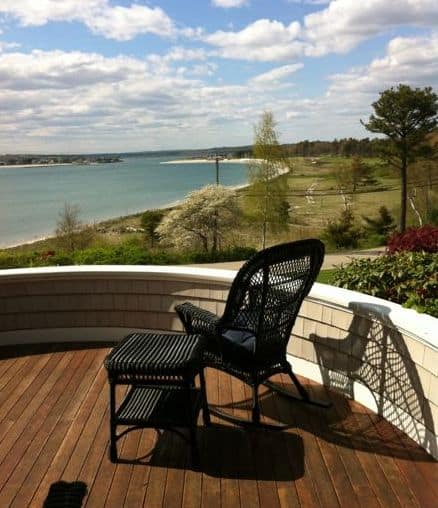 View from the Chart Room 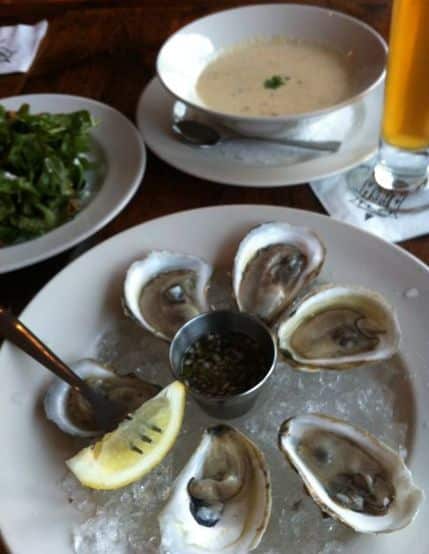 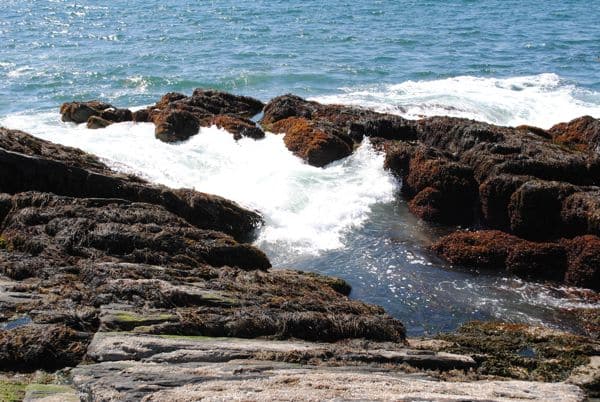 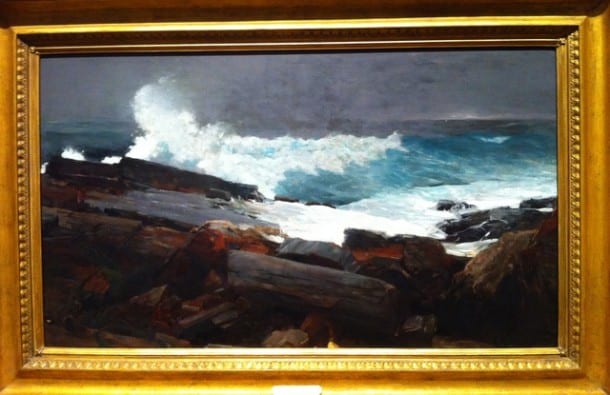 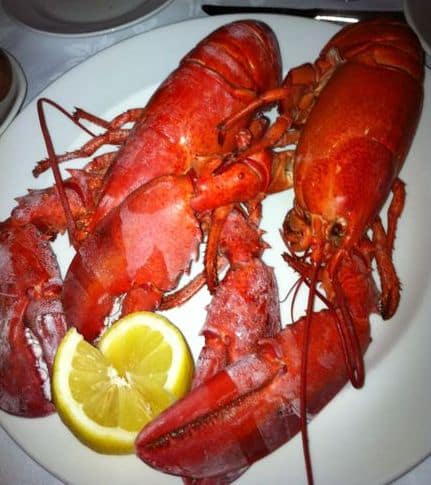 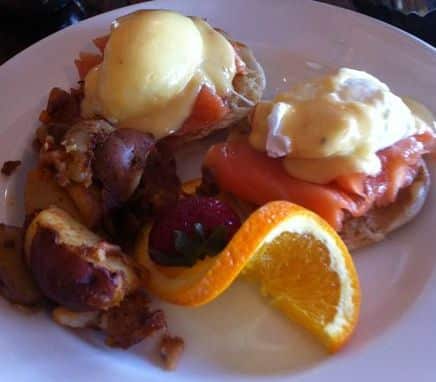 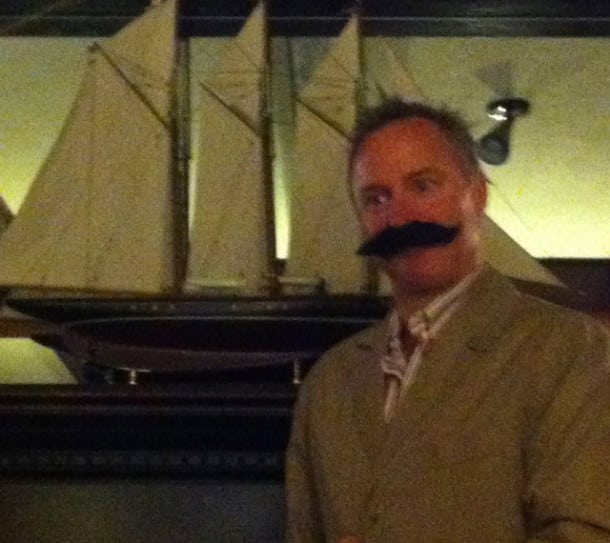 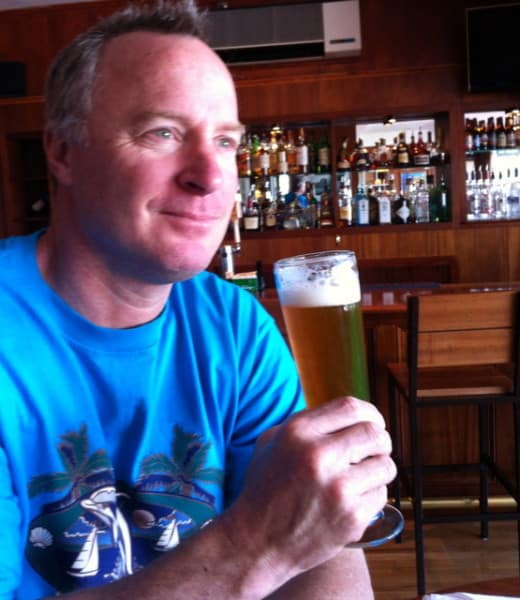 1 Comment On "The Black Point Inn, Prout’s Neck, Maine: An Inn to Come Home to"