If you’re thinking about heading to Las Vegas you’d better bundle up, because baby it’s cold inside. That is, if you choose to go to the new Minus 5 ice lounge, where the temperature is-you guessed it-minus 5 degrees Celsius, or 23 degrees Fahrenheit.

Located in Mandalay Place, adjacent to Mandalay Bay Resort & Casino, Minus 5 is a bar where everything-the walls, the seats (covered with faux fur throws), and the bar-is crafted from large chunks of ice. Even the glasses are made from frozen New Zealand water, and elaborate ice sculptures adorn the intimate igloo-like surroundings. Patrons pay $30 for a 30-minute visit. The cost includes parka and mitten rentals and a drink voucher.

Minus 5 is just one of the newer experiences that Vegas has to offer. Despite the downturn in the economy, new restaurants are opening, new shows are attracting audiences, and there are even additions to the hotel scene, including Donald Trump’s casino-free luxury high-rise, which opened last year, and the vast CityCenter complex, with four hotels.

And because there is competition for the shrinking tourist dollar, bargains abound. Hotels once considered unaffordable to most are now within reach (for example, on recent dates you could stay at the Wynn for just $100 a night).

One of the lures of Sin City for me was the Donny and Marie Osmond show, which recently extended its run for three more years. I actually received “you’ve got to be kidding” comments when I told friends I was going to see the show at the Flamingo. But then again, I got similar comments when, on an earlier trip, I went to see Barry Manilow (who was, by the way, fabulous).

Naysayers aside, Donnie and Marie were great fun. The brother -and-sister duo showcased their talents, singing blues, rock, ballads, Broadway show tunes, and for Marie, opera. When Donny sang “Puppy Love,” I was transported back to the early 1970s, when I would sit in the basement with my portable record player listening to that song over and over, convinced that he was singing it to me, and only me.

They sounded good, they looked good (Dancing with the Stars has sure paid off), and they seemed to have a blast with each other on stage and with the audience, which included an impressive number of die-hard fans. I sat next to Day James, a mother of six from Myrtle Beach, S.C., whose husband took her to Las Vegas for her birthday just so she could see Donny and Marie. Tickets range from $90 to $255 (the higher price includes an after-performance meet-and-greet). As with all shows in Vegas these days, discount coupons are often available online or at hotels and visitor information booths/offices around the city.

Among other popular shows on the Vegas scene is Jersey Boys at the Palazzo, a wonderful experience for Frankie Valli & the Four Seasons fans (and non-fans too, since their rise to stardom and the pitfalls along the way make for a great story). While I haven’t seen Cher’s show at the Colosseum at Caesar’s Palace, or Garth Brooks’ new gig at the Wynn Casino, I’ve heard good things about both.

The Love show is a must-see for Beatles fans. Zumanity, which is for adults only, definitely gets audience members’ pulse rates going. Going to a Cirque du Soleil show is always well worth the price of admission ($60-150). O, the water-based Cirque du Soleil performance at Bellagio, is a mix of slapstick comedy and beautiful water ballet, with some daring high dives, flips, and other gymnastic antics thrown in. Cirque’s Criss Angel Believe, at the Luxor, is a mystery- and illusion-based show that has gotten rave reviews, as has its newest show, Viva ELVIS at the new Aria Resort & Casino at CityCenter.

A couple of new exhibits at the Luxor are also worth a visit. “Bodies: The Exhibition” is not for those with weak stomachs (as anyone who saw the show at Boston’s Museum of Science or other venues around the country knows). Real bodies and individual organs give visitors an up-close and real look at how everything in the human body is connected and how it all works. Tickets cost $30 for adults and $23 for children.

“Titanic: The Artifact Exhibition” showcases more than 300 authentic artifacts from the sunken ship. Even more interesting than the actual items are the stories-told through placards and posters hung throughout the exhibit-of passengers, some of whom survived and some of whom did not. Visitors exit through a gift shop that has some pretty cool items for Titanic enthusiasts. If you go on a weekend, there’s a good chance you’ll get to meet Titanic historian Lee Merideth, who is on hand for book signings and enjoys talking about all things Titanic with visitors. Tickets to the exhibit cost $27 for adults and $20 for children.

America’s Got Talent fans will want to check out past winner Terry Fator-the comedic puppeteer-at his show at the Mirage, which is slated to run through 2012. Tickets cost $59 to $129.

For those on a tighter budget, there are plenty of free offerings on the Strip, from watching the fountains dance in time to the music in front of the Bellagio (and strolling through the hotel’s blooming oasis of a conservatory inside) to watching a volcano erupt at the MGM Mirage-and marveling at the hotel’s 53-foot-long aquarium that boasts nearly 60 different species of coral reef fish. The revamped volcano at the Mirage is also pretty cool. Every hour, on the hour, from dusk until 11 p.m., flames dance to the music of Grateful Dead drummer Mickey Hart and Indian tabla musician Zakir Hussain in this audiovisual spectacle. Also at the MGM Mirage is Siegfried & Roy’s Secret Garden and Dolphin Habitat, where visitors can see white lions, white tigers, panthers, leopards, and a family of Atlantic Bottlenose Dolphins. Admission is $15 for adults, $10 for children 4-12, and free for 3 and under. Jugglers, acrobats and other circus acts delight young and old alike under the big top at Circus Circus, and the wildlife habitat in the Flamingo is rife with lush foliage, waterfalls, and hundreds of birds. Check the schedule for the penguin feedings, which are held twice a day. The Sirens of Treasure Island show, complete with over-the-top pyrotechnics, is performed several times daily and is free. The show can be viewed from the front entrance on the Strip, but the best place for nighttime viewing is from one of the newer clubs in Vegas, Christian Audigier. The trendy nightspot is edgy and dark with red velvet walls, black glass chandeliers and is full of the Los Angeles-based designer’s trademark themes, including skull-and-rose-encrusted mirrors.

As mentioned earlier, Las Vegas has proven to not be immune to the flagging economy, which translates into savings, especially on lodging. The comfortable rooms at one of my favorite hotels, Planet Hollywood (great location, attached to the Miracle Mile shopping center and good restaurants), are going for as low as $79 a night, which includes a dining voucher. Rooms at the 64-story Trump International Hotel are also coming in at under $100 a night-this hotel has incredibly comfortable beds with immense bathrooms with jet-propelled Jacuzzi tubs for two. The Trump is at the far end of the Strip, which might be a turnoff for some, but I like the location: You can walk out the front door, cross the street, and be in the Fashion Plaza shopping mall, which provides a convenient cut-through to the Strip.

On the dining front, a recent trip had me checking out some of the newer restaurants on the Strip. BLT Burger at the Mirage is a hip diner with a way-cool menu that’s tasty and affordable. The Veggie Falafel Burger ($10), served on a whole-wheat bun with an abundance of condiments including avocado, was delicious, as were the crispy sweet-potato fries ($5). I tried the restaurant’s signature appetizer, fried dill pickles ($5), and wasn’t as impressed (maybe it’s an acquired taste), but the milkshakes are another story… they’re $7 each, but well worth the cost. Featured creations include The Twinkie Boy, made with vanilla ice cream, Twinkies, and caramel syrup with a chunk of Twinkie on top. It was like drinking a liquefied Twinkie. There are also spiked shakes for the older “kids.” The Krispy Kreme doughnut bread pudding with rum raisin ice cream is pretty much to die for and a must for Krispy Kreme fans.

T&T (Tacos and Tequila) at the Luxor is another new (and affordable) find… an open-air bar and restaurant where a disc jockey keeps the atmosphere upbeat and large flat-screen television screens hang from the metal canopied bar. The menu is Mexican: flavorful guacamole served with crispy tortilla chips ($10), delicious roasted corn on the cob ($6), chiles rellenos ($15) in a tasty red sauce that was good enough to order again and again. Burritos and tacos are also specialties.

GETTING A DEAL ON VEGAS
There are many travel websites offering Vegas deals, and timing is key. Mid-week is better than weekends, and you should try to schedule your visit for a time when there aren’t large conventions in town (check VisitLasVegas.com, which lists conventions, and avoid weeks where there are 40,000-plus conventioneers in town). I’ve seen the cost of a $69 Strip hotel room jump to as high as $219 during a convention.

Unless you’re a big sports bettor, avoid those dates when major sporting events-like heavyweight boxing matches, the Super Bowl, the World Series, March Madness, and even the World Series of Poker-are being held, since the influx of sports gambling enthusiasts will also result in inflated room rates. 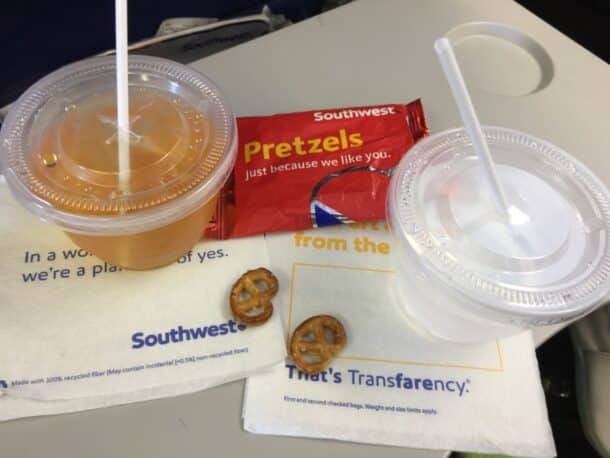 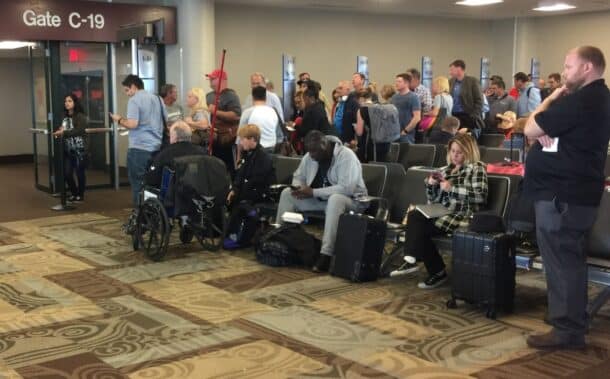 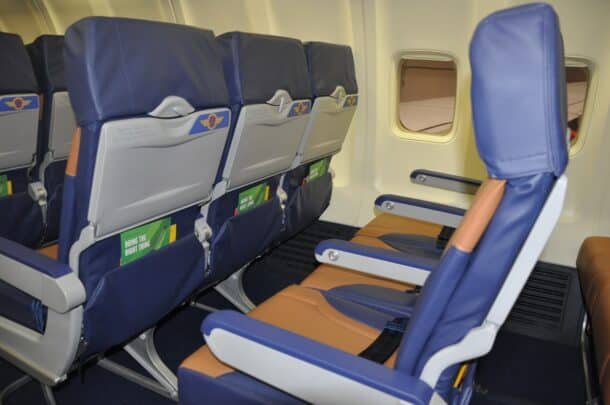 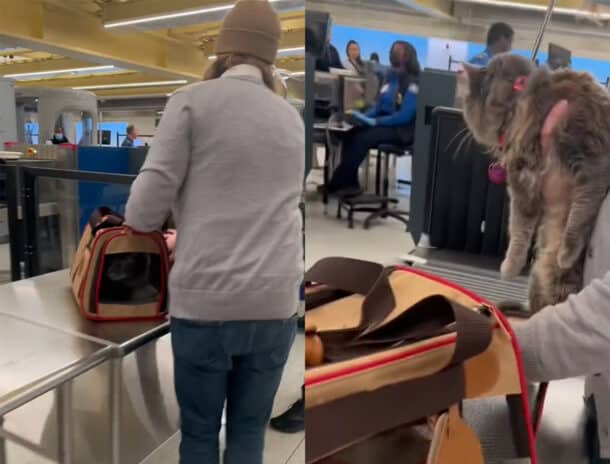