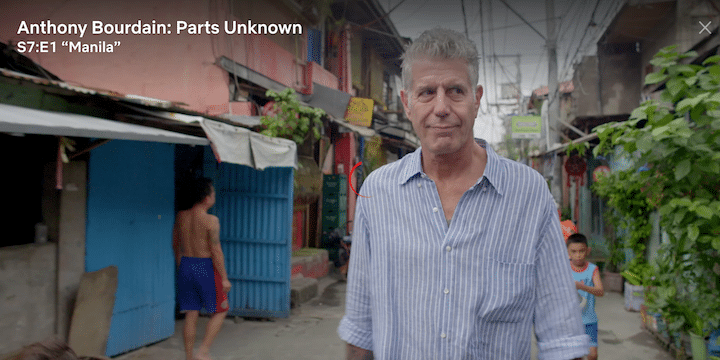 The late Anthony Bourdain was no doubt one of the world’s most prolific travelers. The former chef-turned-TV-star took viewers around the world with him on his popular Travel Channel series No Reservations, which ran for nine seasons, and after that, he hosted and traveled for a similar show called Parts Unknown on CNN. With Parts Unknown, the Emmy-winning host became even more popular, as he showed the world how and where to, in his words, “eat and drink with people without fear and prejudice.”

Parts Unknown is on Netflix but individual episodes can also be download on iTunes, YouTube and more for $0.99 each. While I haven’t seen all of Tony’s episodes, my favorite is the Parts Unknown one in Manila, which you can watch here. It’s the first episode in season seven. The show really transformed my impressions of the Philippines. I had no idea how generous or into Christmas Filipinos are. Did you know they start preparing for Christmas at midnight on September 1?

The 44-minute episode is described on IMDB as follows: “In the season seven premiere, Bourdain explores the Philippines during Christmas season and travels through the festive streets of Manila to taste the fast food wonder Jollibee, try the sweet, milky drink, Halo-Halo, and indulge in the classic dish, Sizzling Pork Sisig. The trip continues with the host accompanied by cover band ‘Keystone,’ as they dine on Adobo, a simmered pork-chicken dish. The tour concludes with a family meal of Kare-Kare and the opening of the Balikbayan box.”

Do you have a favorite episode of Parts Unknown or No Reservations? If so, share it in the comments!