The big British Airways news right now concerns the possible strike that could begin as soon as August 6. At the time of this writing, members of the British Airline Pilots’ Association (BALPA) have voted for/against a strike. BALPA will reveal the results later today, first to BA. You can find more details in this Independent story.

Elsewhere in the BA universe: the video above from YouTuber Cargospotter. In the video, an Embraer E190 comes in to land at Skiathos Airport (JSI) in Greece just above the heads of onlookers. Skiathos Airport, which serves the island of Skiathos, is famous for the public access it allows people near the runway. For this reason, people sometimes refer to it as the “European Sint Maarten.” Sint Maarten/Saint Martin’s Princess Juliana International Airport (SXM), the airport of comparison, is famous for its landings just beyond public Maho Beach. And Cargospotter writes as much in the video’s description. In fact, he/she calls Skiathos Airport “one of the most amazing places worldwide…”

On the day of the landing captured above, Cargospotter says that “the people who were watching the planes were pushed from the wall by the wake turbulence of the Embraer.” Pretty wild, eh?

More low landings like this one at Skiathos Airport 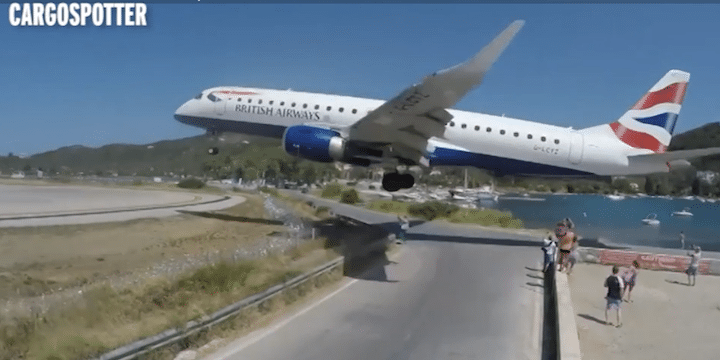