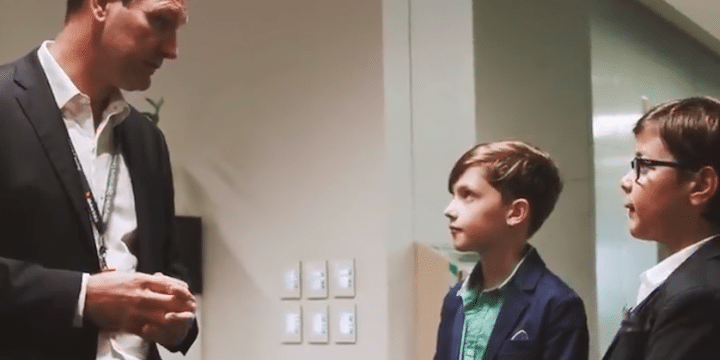 Alex Jacquot is a 10-year-old airline CEO and enthusiast who founded an airline (not legally speaking, at least yet) with his friends and classmates. When he wrote Qantas CEO Alan Joyce to set up a meeting to discuss best airline practices, the Qantas team promised to deliver—and as seen in the video (on Twitter) below, they did.

Last week, Qantas hosted Alex, his friend Wolf (Deputy CEO) and his seven-year-old sister (Head of Inflight Service) on a tour of Qantas HQ in Sydney and quite a bit more. As part of the meet-up, Qantas help Alex and his team develop a new logo and business cards for their Oceania Express, and even mocked up a Boeing Dreamliner for them. “In his letter,” Joyce said, “Alex asked me to take him seriously. So we did.”

You can read more on the story here. It’s pretty neat!

Remember the 10-year-old CEO who started his own airline?

We said we’d host him and his fellow executives at Qantas for a historic aviation summit.

And we weren’t joking. pic.twitter.com/H2hSKEc9ob