On Saturday, comedian John Mulaney hosted Saturday Night Live. It was his third time hosting the show, which he’d previously worked at as a writer for many years. Among the night’s sketches was the one above, called “Airport Sushi,” which caught the attention of the travel world—not to mention New Yorkers, flyers, and anyone who’s been in an underwhelming airport. It’s set at LaGuardia. It begins with Pete Davidson and Chris Redd buying food and drink from Mulaney, like a “Chobani yogurt with no spoon to eat it with” and a “bottle of water that will roll to the back of the plane as soon as we take off.” When Davidson orders sushi, the sketch breaks into a musical…

Mashable adds that, “The sketch’s musical stylings wind through the familiar terrain of Broadway faves like The Phantom of the Opera and West Side Story, but the songs themselves are about raw fish at the airport and maligned New York City Mayor Bill De Blasio. Also, Jake Gyllenhaal pops up. So does musical guest David Byrne. It’s a Sack Lunch Bunch reunion!”

Check out “Airport Sushi” above! 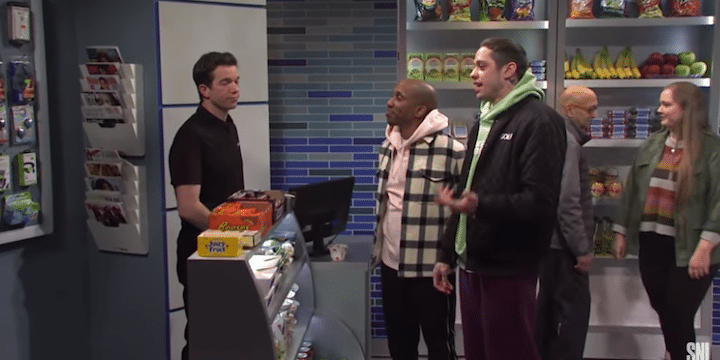