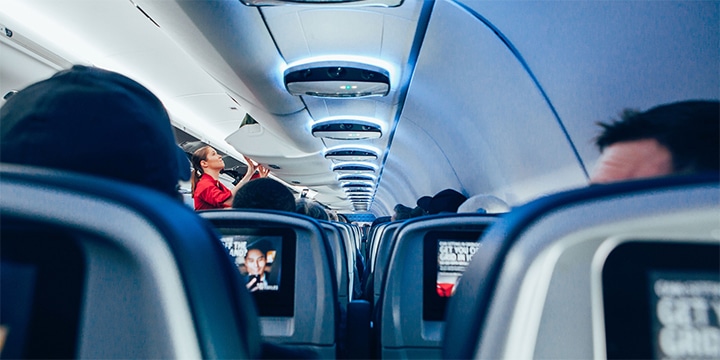 Many of us have made a friend while flying, however many of us have also experienced the exact opposite…the worst passenger ever. And as luck sometimes has it, they are seated right next to you. We asked some of our favorite frequent fliers to spill their worst seatmate stories, from drunk passengers to unruly canines in tow.

Surprise feet
Chris McGinnis of TravelSkills spills about his biggest seatmate issue: FEET. “I’ve had several seatmates who have no feet etiquette at all. My rule is that feet should always be covered with shoes and/or socks on a plane. No bare feet. It’s gross and dirty. I’ve had seatmates who pick at their feet, then touch the controls to the light or air vent. Yuck! I’ve seen feet on seatbacks, propped against windows, hanging from business class tray tables, curled around video screens, and creeping through the space between my seat from behind and tickling my elbows with their toes. Romantic partners massaging each other’s feet, too! Enough already! Keep feet covered, and keep them on the floor!”

Too many screwdrivers
Tiffany Dowd of Luxe Tiffany/Luxe Social Media, says, “One of my worst seatmate experiences was on a five-hour flight from New York to Barbados when my seatmate proceeded to get drunk at 8am after drinking several screwdrivers. On his third screwdriver, he spilled his entire drink on me, and I was sticky with orange juice and smelled like vodka the rest of the flight. Then he wanted to keep chatting about where I was from and where I was staying. I didn’t engage and pretended to sleep and listen to my music the rest of the way.”

Furry friend
Johnny Jet’s Ask A Pilot columnist Spencer Marker says, “I was riding in uniform as a passenger in the bulkhead row, seated next to a guy with a yellow labrador service animal. The dog must have weighed over 100 pounds. The dog was sweet and almost as soon as I sat down, he laid his head on my leg. I asked the owner if I could pet him and he agreed. After vigorous head scratches, I stopped and settled in for the flight. Apparently, the dog took this as “I guess we are best friends now!” and proceeded to lay his head on my leg for the entire three-hour journey. When I stood up to retrieve my bags after our arrival, my black uniform pants were covered with yellow fur and dog drool! I had a good laugh but it took extensive use of a lint roller and paper towels to make me presentable again!”

Risqué photos
Matt Guidice of Matt’s Flights says, “I was on a flight from Austin to Ft. Lauderdale. It was a Southwest flight so you aren’t assigned a seatmate. While in the boarding area, a nice middle-aged woman started a conversation with me about travel. Once I boarded I saw her waving her hands to come sit next to her. I didn’t want to be rude and she seemed nice so I stuffed my backpack in the overhead and sat down in the middle seat. Three hours later, I had seen a handful of risqué pictures on her phone, was told numerous stories about inappropriate encounters and was even invited over for a massage.”

Cat lover
Elaine Thompson at Amigo Energy says, “We were on our way to Hawaii and I was seated next to a very friendly man with a very grumpy cat. This man explained to me (in detail, with lots of backstory) that he was moving to Hawaii and was bringing along all of his animals — two cats and three dogs, all in carriers under various seats on the plane. His cat was NOT happy about being stuck on an airplane in a carrier under a seat and made it very well known to me. The entire 8-hour flight was spent trying to ignore his yowls and trying to remain polite to the cat-owner who wished to share all of his knowledge on cats, Hawaii, and cats in Hawaii.”

Wrong time to open the door
Travel expert and writer Lee Abbamonte has encountered one too many drunken passengers. But this particular time, it got a bit out of hand. “I once sat next to a guy on a flight from LA to Tokyo with a continuation to Singapore,” he says. “He got really drunk the entire way to Tokyo and didn’t say too much. I saw him on our stopover go to the bar at the Tokyo airport and then he continued drinking hard on the flight to Singapore. About halfway through the flight he starts yelling at everyone and then proceeds to jump up and tries to open the door to the outside. A few people had to detain him for the remainder of the flight.”

Surprise pickings
Mia Herman of Travel with Mia recalls, “I was on a flight from Hong Kong to Tokyo. The man next to me kept picking his nose and then he used the same finger to change the channel on his seatback monitor. YUCK! When I noticed it, I took out some antibacterial wipes and wiped down MY screen, armrests, and air vent. To my horror, this went on for the entire 4.5-hour flight.”

The cuddly dog
Jordan Brannon of Coalition Tech says, “It quickly became apparent that the man I was seated next to had an issue with the young woman across the aisle … or the young woman’s small (toy-sized) dog to be exact. He was photographing and filming the woman and her dog, tweeting the United customer service account, and filming the flight attendants as they did pre-flight procedures. When his demands for the dog to be stowed in a carrier were refused, he began to fake sneeze, and claimed an allergy. Unfortunately for him, the dog breed was hypo-allergenic and his acting was derided by people in nearby rows. When the plane finally made it off the tarmac, a drunk passenger in the rear of the plane began to harass him. This drunk would meander down the aisle, stop to loudly proclaim how beautiful and cuddly the dog was, occasionally overreact to a small noise the dog would make, or sneeze in a very dainty manner [to make fun of this man]. By the time we landed, 5-6 city police officers were on hand to interview both the drunk and the dog allergic, overly sensitive, bully of a seatmate.”

Worst seatmate you’ve ever had? Share your story in the comments section below!